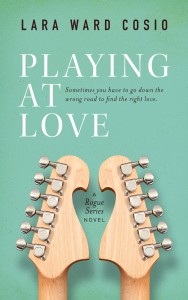 Playing At Love is a glam, globetrotting exploration of the complications of friend and love relationships that will leave you rooting for the rogue(ish) heroes.

Conor Quinn and Gavin McManus are mired deep in the wreckage of a betrayal that has damaged their friendship, ended Gavin’s marriage, and threatens to break up their band.

Conor’s shaken by the mess he’s made and no longer trusts his heart. Book smart but love dumb, he decides acting with more calculation in matters of the heart is the key to moving forward. He starts by wooing back his ex, Colette, and quickly ends up engaged—and in over his head.

When Conor’s old schoolmate, Felicity, unexpectedly returns to his world, he gravitates with increasing frequency toward their renewed friendship. Harmless flirting soon turns into real temptation and suddenly Conor’s questioning whether his impetuous reunion with Colette means he’s missed his chance with the right woman.

Felicity is still stinging from a brutal divorce and wary of her old friend’s rock star ways. She wants stability, not the boy who ran off to join the rock circus and never had a proper job or responsibilities. But that doesn’t mean she’s immune to his charms.

At the same time, wounded, passionate singer Gavin has a song-writing epiphany that convinces him he can’t stay stuck in the past. And he knows what matters most is his wife, since he refuses to believe their love story is over.

As Conor’s wedding rapidly approaches and Gavin attempts to reunite with his wife, both men must also find a way to keep their band together as they strive and stumble toward something resembling redemption—with each other and with the women they’re meant to be with.

What Inspired You to Write Your Book?
How did Playing At Love come to be?
I’m a huge music fan, and so got to thinking about the dynamics involved in long-standing bands and how they change and grow over the years based on the significant others that enter the picture. I wondered what would happen if one band member ended up with the wrong person. How would that change the relationship he had with his friends/bandmates? As I began writing, the characters took things to new and unexpected directions.

How Did You Come up With Your Characters?
In thinking of the type of band Rogue would be, I knew that the guitarist (in this case, Conor Quinn) would be both very good looking and very talented – two keys to a band that draws die-hard fans. But he, of course, has his flaws, the biggest is in matters of love. He’s book smart but not love smart and over the course of many years that leads to trouble. The other big character in the book is the singer, Gavin McManus. I believe in the theory that good art is inspired by tortured emotions. He has a childhood tragedy that has never been healed and draws from it to create great music.

Buy Playing At Love: A Rogue Series Novel On Amazon