You are here: Home / Children and Young Adult Books / Peter Polo and the White Elephant of Lan Xang by Craig Bradley 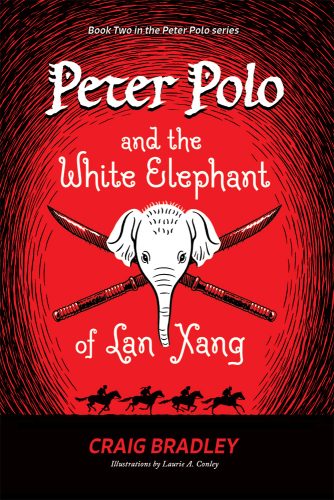 In “Peter Polo and the White Elephant of Lan Xang,” Peter Polo, Marco Polo’s younger brother, and his friends, Tariq and Beki, are sent on a mission to the remote Southeast Asian kingdom of Lan Xang by the Great Kublai Khan, Emperor of China. Their mission: to stop a war between Lan Xang and the neighboring kingdom of Lan Na. The two erstwhile allies are on the verge of fighting all because of a baby white elephant.

The friends are guided on their journey to the warzone by the crown prince of Lan Xang, Prince Kham. While they travel south through the heartland of China, Kham explains the significance of the white elephant and why it has caused Lan Na to invade its neighbor. A near-disaster involving Beki, the Great Khan’s favorite daughter, leads to a budding romance between her and the prince, much to Peter’s consternation.

As the group floats down the Mekong River, they encounter giant catfish and eerie caves full of Buddhist statues. After Tariq is kidnapped, the group finally reaches Luang Prabang, the capital of Lan Xang, but only after barely escaping from soldiers from Lan Na.
From Kham’s parents, the king and queen of Lan Xang, Peter learns that Kham’s sister, Princess Dao, has been captured by King Naja of Lan Na and is being hostage until the white elephant is turned over to him. Armed with a letter from the Great Khan ordering Naja to halt his invasion, they go to meet him in his encampment outside the city walls.

Things don’t go as planned when Naja rejects the Great Khan’s order and Peter, Beki and Kham witness Dao and Tariq being held in a cage. When the king of Lan Xang hears of this, he reluctantly decides that he will have to turn over the white elephant in order to save Dao and Tariq.

The elephant is about to be delivered to Naja when Dao and Tariq somehow manage to escape, and the elephant remains with Lan Xang. Thwarted from getting the elephant, Naja unleashes a fiery attack on Luang Prabang. The city, which is preparing for the new year’s festival of Pi Mai, is on the verge of being destroyed.

The finale of the book sees Peter and his friends working together to keep Naja from getting his hands on the elephant. It all culminates in a bit of trickery that causes everyone to come together to defeat Naja and restore peace to the two kingdoms.

What Inspired You to Write Your Book?
Growing up in Thailand and Laos and working in Pakistan and South Korea inspired me to write books in which children could have fun learning about historical periods and cultures that they may not hear much about in school.

I conceived of a series in which Marco Polo's fictional younger brother, Peter, travels with his friends on behalf of Kublai Khan to resolve crises in far-flung regions of the Mongol Empire.

My hope is that the books will inspire middle-grade students to seek out more books to learn about this fascinating and critical region of the world.

How Did You Come up With Your Characters?
I created the two main characters in the books, Peter and Tariq, based on my own experience having a younger brother and also watching the dynamics between my two sons. Older siblings frequently want to protect their younger brothers and sisters, but that urge to keep watch over them can sometimes lead to resentment and rebellion from the younger siblings. On the other hand, younger siblings often aspire to be like their older sisters and brothers, so it creates a wealth of narrative possiblities for conflict and cooperation.

The female lead, Beki, is based on my female relatives who have always liked to do the same things as the boys and men of the family, whether it be traveling to and living in exotic and sometimes dangerous countries, or engaging in outdoor activities such as hiking, camping and fishing.