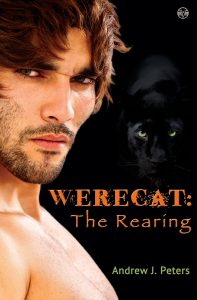 For Jacks Dowd, a college senior who feels ungrounded from his family and life in general, an alcohol and sex-infused weekend in Montréal sounds like a pretty good escape. His Spring Break binge takes a detour when he meets Benoit, an admiring drifter with startling green eyes. A hook-up turns into a day, two days, and then a full week in Benoit’s hostel, making love and scarfing down take-out food. But at the end of the week, Benoit demands that Jacks make an impossible choice: stay with him forever, or go back to college and never see him again.

There’s something dangerous about Benoit, but Jacks has fallen for him brutally. The night before Jacks is supposed to return to college, he finds Benoit in Mont Royal Park, where they first met, to try to work things out. Benoit springs on Jacks an unfathomable secret: he’s a mythical creature, half man and half jungle panther. He traps Jacks in an abandoned cabin and performs an occult rite so they will be mated forever.

On the adult side, his Werecat series was a finalist in The Romance Reviews' 2016 Readers' Choice Awards. His latest novel The City of Seven Gods was a shortlisted as a 2016 Foreward INDIES Book of the Year. He is also the author of Poseidon and Cleito, which explores the origins of the Atlantis legend. In 2016, Andrew was included in Loop Magazine's "Four Must-Read Authors with Buffalo Ties." (That's the city of Buffalo; Andrew doesn't wear ties with buffaloes).

Andrew grew up in Amherst, New York, studied psychology at Cornell University, and has spent most of his career as a social worker and an advocate for lesbian, gay, bisexual and transgender youth.

Most of Andrew’s work takes inspiration from mythological themes, but as a young writer, he adored Agatha Christie. At Smallwood Elementary School, he was briefly a literary celebrity when his school principal invited him to read from his novel Murder at Moosewood Mansion over the P.A. system at lunch.

In the 90s, Andrew founded a ‘Coffeehouse’ in suburban Long Island to provide a safe place for LGBT teens to make friends, express themselves through the creative arts, and get help if they needed it. While he writes about fantasy worlds, his work tends to feature LGBT characters, and he is proud to write gay fiction for readers of all ages.

Andrew lives in New York City with his husband Genaro and their cat Chloë. Outside of writing, he is an administrator and an adjunct professor at Adelphi University School of Social Work.