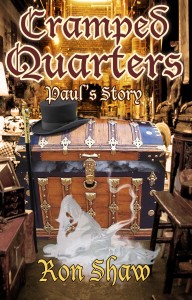 Do you believe in ghosts? Ron Shaw does, because one named Mary entered his life with a story from the crypt that had to be told, and Mary has plenty to divulge.

An evil guardian, a bat in the attic, an untrustworthy poet, and a wealthy young lawyer named Paul all drive Ron’s ghost as she strives to escape the shackles that bind her.

In this, the final offering in The Cramped Quarters series, Mary finally reveals Paul’s Story.

Internationally recognized author and host of The Ron Shaw Show on ArtistFirst Radio Network, Ron has done it again in this final chapter of his acclaimed Cramped Quarters series, as he weaves fear, joy, and love into a story you won’t soon forget.

Don’t miss this one!

What Inspired You to Write Your Book?
Mary the ghost has inspired this entire series.
PAUL’S STORY is a short tale which carries the series forward after her untimely and brutal demise.
The ghost is born!
When we purchased her trunk at an estate sale we had no idea that these events would unfold.
Mary continues to make her presence known. I’m pleased to announce they have been less frequent since her story’s beginning has been told.
I have no idea when, where, why, or how her tale will continue.

How Did You Come up With Your Characters?
There are real characters such as myself and my family. Mary has presented her life’s history for me. This includes those characters that date back to her life in Victorian England.

Book Sample
Mary’s ghost remained, but behind it and all around me, we were transported back in time to 1909. We were on the docks of New York City’s harbor. The RMS Adriatic was in the background, and I stood upon the dock.
The area was huge and sparsely occupied. In the distance in both directions, I could see a few people walking to and fro, taking care of their business.
One person to the far right of me loaded luggage into their waiting automobile. A couple to my far left walked hand-in-hand away from the ship towards the warehouses that were close to the docks.
I could see nothing behind me.
Mary floated in front of me for a moment more, but then she drifted quickly, drastically, effortlessly to my left.
Straight ahead, Paul walked down the gangplank with a ship’s mate following behind with her remains and trunk on a cart. It was as if the burly man was carrying bags filled with Irish potatoes from the RMS Adriatic, so little did he appear to care.