You are here: Home / Fiction / Horror / Patience is Waiting by David-Matthew Barnes 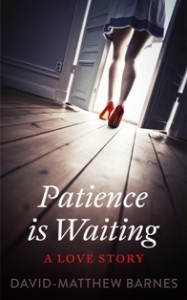 Over the course of her life, a young woman named Patience strikes revenge against those who have wronged her. As each act of violence becomes more brutal and her list of victims grows, nothing can stop her.

What Inspired You to Write Your Book?
I was very inspired by the famous quote by William Congreve, “Hell hath no fury like a woman scorned.” The entire theme of the novel is revenge, told from the perspective of a woman who has been wronged by many. Gender played a key role in the way I told the story. So often vengeful female characters are one-dimensional. Here, it was important for me to avoid this by exploring why my main character was so hell-bent on destruction.

How Did You Come up With Your Characters?
I had a very clear vision of my main character, Patience, before I started the writing process. The other characters were developed through a lot of pre-writing and plot planning. I was also greatly inspired my music while writing the novel. This certainly influenced character development. Many characters also came through observation. People watching can be an author’s greatest resource.

Book Sample
His body was heavy. It took every ounce of strength Patience had to pull him from the back of her mother’s station wagon, lower him to the ground without losing her grip, and drag him into the water. He was wearing a suit, under which was a dress shirt that was missing the third button down. It was the same stale color as the gloomy sky. His favorite tie, the black one with tiny white checkered squares on it, had loosened around his neck. It flapped in the wind, rising up and brushing her left cheek. Her hands were cupped under the arms of his dry-cleaned navy blue suit coat. His balding head bobbed between her legs and smacked between her knees like a weighted balloon attached to a fat middle-aged stick. Until he was in the water, she couldn’t breathe. It was there she let him drop.

There was little splash or sound when he slipped beneath the murky water. His eyes were open, though; gaping and staring up at her, wide and alert and permanently terrified. The knife – the one her mother had ordered off of television because the commercial boasted it could cut through anything – was still in his heart. The black handle, wooden with gleaming silver trim, stopped where it met his split, ripped skin. Within seconds he disappeared. Finally, after four years and twelve days of his berating and his criticism and his nightly sermons on God, the apostles, the saints and the detrimental temptation of sins and lust, he was now resting quietly on the bottom of the lake like a botched baptism.

It was easier than she expected. She waited for him in the garage after school, in the far left corner, near the water heater. It was a place she knew well, as it’d come to be her hiding spot. It was the one place he couldn’t get to her. She was small enough to wedge herself into the tiny space between the cinder block wall and the cylindrical heater. He was too big to get back there. Sure, he tried. But after a few futile attempts at shoving his fat arm through the narrow gap, he would tire and give up.

Day after day, she would wait there until her mother came home complaining about another long day at the day care center, demanding to know why nobody had filled the dishwasher like she’d asked. Later, she’d fix them pot pies or tuna casserole. They would eat dinner in silence, avoiding each other’s eyes, ignoring one another’s existence. From across the table, Patience would watch her stepfather’s mouth gnashing bits of food like an animal. All the while she fantasized about slitting his throat. Or, better yet, stab him deep inside his fat, black heart.

Once she finally decided to go through with it, the worst part was the waiting. She was anxious, longing for the act to take place. She thought about it, imagining it every second of every day, while she sat in the back of the classroom or lay awake in her bedroom watching the red digital numbers on her alarm clock. She couldn’t wait to do it. The excitement of it all nearly drove her insane.

Buy Patience is Waiting On Amazon