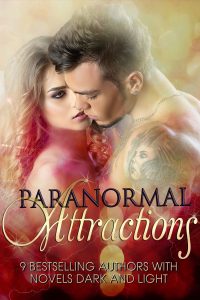 Vampires, sexy ghosts, gargoyles, mummy’s curses and a secret magical society are some of the fabulous paranormal twists you’ll find in PARANORMAL ATTRACTIONS, a boxed set of 9 steamy romances brought to you by Amazon, Barnes & Noble bestselling, and award-winning authors. Lose yourself in these light and dark paranormal stories that are only around for a short time.

My Blood Runs Blue – Stacy Eaton
Officer Kristin Greene’s life is turned upside down when she begins to investigate a homicide and finds that killer is something out of her nightmares. What will happen when Julian and Alexander introduce Kristin to the world of vampires?

Instinct – J.A. Belfield
Werewolf Sean Holloway treats the village marketplace like a sexual buffet, until his instincts guide him toward the unique scent of the nonchalant Jem Stonehouse. Despite his pack’s rules, he wants her—an attraction that can bring only danger for Jem. Will Sean defy his own Alpha to save the woman he loves?

Parlor Games – Bonnie Edwards
Carrie MacLean and Matt Crewe have secret needs when they arrive at Perdition House for a sexy bachelor auction. Can love survive the mesmerizing spirits of the hookers who once lived and worked in the haunted bordello?

Love Set in Stone – Staci Troilo
Perched above Pittsburgh, a gargoyle spends centuries as a protector of humanity while he waits for the one who will break his curse and free him from his stone prison. When he finally finds her, her life is in jeopardy, and he realizes he may face eternal damnation to save her life.

Romance Under Wraps – Michele Jones
The Carnegie Museum of Natural History gets an Egyptian installation, and it seems to come with the ubiquitous mummy’s curse. Death and destruction abound. But the real curse is on the mummy’s advisor—he must teach the mummy how to pass forty-three judgments or find the reincarnated queen and win her love—or they are doomed to continue reawakening every century to try all over again.

Phantasm – J.L. Campbell
After losing her husband in a tragic accident, Josette is convinced she’s on the road to recovery—until Dwayne starts appearing to her in ways that take her to the edge of terror and back. Can Mario Browning, a persistent and perceptive man, save her from falling into a dangerous abyss between the world of the living and the dead?

The Beckoning of Beguiling Things – Calinda B
Can 24 hours really change your life in magical ways you never imagined? Marissa Engles is about to find out, when she heads to Las Vegas, meets sexy, Thunder and Lightning dancer Chris King and unwittingly unleashes the force of a secret, global, magical society known only as the Numina.

Remembered by Moonlight – Nancy Gideon
The deadly leader of a shape-shifter clan with no memories of who he is and a dedicated cop hiding a heart-breaking secret face impossible odds in steamy New Orleans that conspire to pull them apart. Because the enemy they pursue . . . might be him.

Once Forbidden – Hope Welsh
Devlin wants her from the moment he sees her save a child in a fire, but it’s forbidden for vampires to change humans. Can he bear to let her go?

What Inspired You to Write Your Book?
Instinct is part of my Holloway Pack series, which has been, and still is, great fun to write. Being able to share this part of my characters’ story in a set with 8 other great authors just makes it all the more so.

How Did You Come up With Your Characters?
Jem and Sean from Instinct have always been very loud inside my head, Sean especially. His name was an insistent nag he wouldn’t let me ignore, and I eventually gave in and wrote their story. The first in the series, Darkness & Light is set in modern times, whereas Instinct takes the reader right back to their roots and how Jem and Sean first came to be who they are.

Book Sample
Beside the forest stream, a fallen trunk from winter last provided a sufficient resting place for Jem. If James detected the hint of a human alongside a trail of my own, he would be furious, so it seemed the best area to take her, as the hunts rarely stretched that far to the northeast.
Her skirt splayed around her to drape over the log and moist ground, as her outstretched hands offered balance to her bowed back. The sun seeping through the branches lent a glow to her cheeks and raised chest.
Head resting against my linked fingers, I lay upon a blanket of twigs and scattered fern beside the riverbank and watched her face tilt toward the sky.
“It is quite beautiful here,” she said. “I have never been surrounded by such silence.”
“The forest is never silent, Jem.”
I heard plenty: the breeze and the susurrant whispers of its passing, the gurgles of the river as it travelled its merry journey, the chirp of fledglings in the highest of branches, scurrying, wings, pecking, the faint and distant gobbling of a fox.
“I hear nothing but the wind.”
“Because that is all you expect to hear.” I rolled up and knelt before her. “Close your eyes.”
Her chin lowered, and she narrowed her stare, but I brushed my fingers over her lids until they dropped and held my hand over them.
Leaning close to her ear, I whispered, “Trust me.”
“Is that another of your attempts at humour?”
“Do you find me amusing?”
“Not at all.”
I chuckled before hushing her to be quiet. “Listen carefully. What do you truly hear?”
It took immense effort to show restraint whilst so near. A tilt of my head revealed the hint of her small breasts, peeking from the bodice of her dress, and each intake of her scent sent shivers down my spine.
“The wind,” she whispered, her breath skating over my cheek.
“Not good enough. Try harder.”
The breeze she spoke of blew through on the river’s current and toyed with her hair. At that moment, I wished I were the wind, free to dance across her flesh, seep through her clothing, and explore the forbidden depths of her body beneath.
“Birds,” she said, her murmur drawing me back.
“What else?” I asked.
She gave a sigh before falling quiet.
Pulling back to study her, I smiled at her frown of concentration, and had urges I wished I didn’t have to suppress, as her lips parted to allow the passage of her breaths. When I moved back to her ear, her hair blew around to tickle my cheek, and her artery drummed against my jaw, matching the throb of my own below. Considering tasting her pulsation, I tilted my head toward the flesh there.
“I hear you, Mr Holloway,” she whispered, causing me to pause. “I hear your breaths and the beat of your heart.”
Leaning back, I removed my hand from her eyes, but she did not open them.
“There is gentle thunder somewhere deep within your chest,” she continued, and when she lifted her lids, her moist eyes glistened like two pools on a winter’s eve.
The urge to tear at her clothing, and relieve myself of the pressure her presence encouraged, rushed at me with the force of a malignant wolf. Yet, taking a deep breath that shuddered my shoulders, I did not. Rather, fingers cramping against fulfilling my needs, I took her hand and introduced her to more that the forest had to offer.
Oddly, my first day with a female I did not devour turned out to be one of my most favoured.