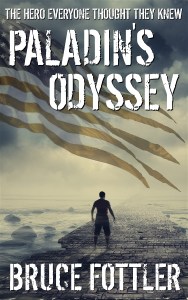 Joesph Paladin is a national hero everyone thought they knew – a former major in the United States Army, retired colonel in the Maine Republic Militia, and considered one of the key founders of the New American Confederation. His legendary odyssey to reunify a fractured nation in the aftermath of the great flu pandemic is a household story. In his long awaited memoir, Paladin shares untold stories of his past, including a shocking secret that he’s harbored for decades. Is he really someone who should be held in such high esteem?

What Inspired You to Write Your Book?
The idea behind “Paladin’s Odyssey” has been bouncing around my head for a while, and usually got stirred up after seeing whatever big-budget global disaster movie. It always got me wondering what would really do us in. Out of all the scenarios I’ve seen or thought about, it’s a global pandemic that seemed most plausible.

In particular, the Spanish Flu outbreak of 1918 fascinated me. They call it the forgotten pandemic and it killed over 50 million people worldwide. That’s a staggering number of deaths for that time, and it amazed me that something that quick and devastating didn’t unravel the civilized world. Keep in mind that many countries were already in the thick of World War One, so there was already death and destruction on a scale never seen before – and yet the world seemed to shrug off the pandemic like it was a speed-bump in history.

This got me wondering if today’s world would be able to handle a similar outbreak. We live in a time when a well-timed bad earnings report could tank the New York Stock Market, or worse, a few terrorists could hijack an airplane and bring the world to a standstill. Recently, a couple of U.S. Ebola cases touched off a media frenzy that had our country in a tizzy. Can the world really handle something on a much larger scale when we all seem primed to panic over something relatively smaller?

How Did You Come up With Your Characters?
The main character (Joesph Paladin) started as nothing more than a spoiled, middle-class kid raised in the suburbs. When pondering his situation in the face of a global flu pandemic, he concluded that he couldn’t survive in a world without convenience. He needed his car, electricity, well stocked grocery stores, drive through service, and his data-phone. It was all slipping away and he was forced to contend with a new world order. I based Joe on a number of “heroes”, particularly those who we hold dear from the Bible. They stand out as icons, but when you look closely, they had their flaws – mostly being reluctant to take on the task before them.

Book Sample
Winston Churchill once said: “In wartime, truth is so precious that she should always be attended by a bodyguard of lies.” I’ve always believed this to be so, but I’ve also struggled to determine when the bodyguards should be retired.

About the Author:
Since exiting a finance career in a world of cubicles, Bruce Fottler has been busy writing novels. His latest is the post apocalyptic thriller: “Paladin’s Odyssey.”

Bruce grew up in the Chicago suburbs and moved to the Boston area as a young teen. While seeking a career-track that mostly put him behind a desk, he dabbled in creative pursuits such as producing, writing, and directing film shorts. However, it was always writing novels that interested him the most because they aren’t limited by production budgets, technical capabilities, or tight shooting schedules.