You are here: Home / Fiction / Horror / Owl Manor – the Dawning by Zita Harrison 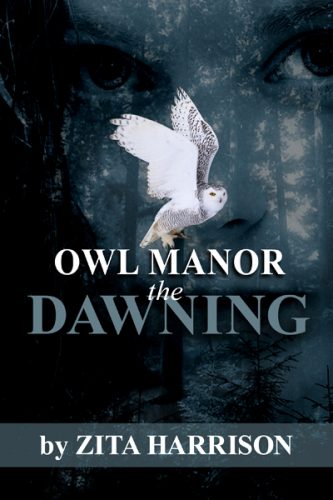 Sometimes the tide sweeps us into a fog where dark forces are at work…
All of a sudden evil and good become blurred…
Powerless and defenseless, we swim toward it, and wonder if we’re going mad.
Stifled by the repression of women in the 1800s, trapped in a loveless marriage, Eva lives a life of dissatisfaction and frustration. The tide sweeps her to the Rocky Mountains during the gold rush in 1859, where she finds unexpected hope at Owl Manor, a strange, dark place with owls in the very fabric of its walls.

But the stakes are perilous. Shadows wander the dim corridors. The owner of the manor is moody, volatile. Does she dare trust him?

Filled with Poe-esque atmosphere, dark desires and supernatural elements, this book is a must read for fans of Gothic Romance.

What Inspired You to Write Your Book?
It was a combination of things! I’ve been fascinated by the dark and uncanny all my life, including the darker side of humans. The side perceived as something to keep hidden. It’s an integral part of who we are, however, a product of what life has thrown at us, and is responsible for much of our behavior and many of our choices. And I find it infinitely more interesting than the average, “normal” side of things, whatever that is.

When I was growing up, I avidly read ghost stories. Then, in high school I met and fell in love with Wuthering Heights by Emily Bronte. My thesis for my Masters in English was a comparative analysis of Gothic Literature versus Expressionist Art, specifically the work of Pablo Picasso, who said, “A work of art must make a man react, feel strongly, start creating too, if only in his imagination. He must be seized by the throat and shaken up; he has to be made aware of the world he’s living in and for that he must first be jolted out of it.” My all time favorite quote.

How Did You Come up With Your Characters?
The characters are based on bits and pieces of people I’ve come across in life. Family, colleagues, classmates, those I have heard about on the news, and those in other books I’ve read. And, of course, bits and pieces of myself. 🙂

Book Sample
Suddenly, there was a loud crash. I spun around, but again, there was nothing. Then, I heard the sound of breathing. It was guttural, like a growl, but unlike any I had heard before. There was another loud crash, and the breathing got louder. It sounded like a large animal, perhaps a mountain lion. Worried for my safety, I turned and walked slowly away from the sound, then ran, smashing through the underbrush, tearing my clothes, slashing my face. I tripped over something large and pitched face forward into the damp earth. When I raised my head, I found myself staring at the carcass of a deer. Its stomach had been ripped open, blood and entrails spilling out. It stared at me with sightless, dead eyes. I lurched to my feet, took a few steps back, and found myself against a moss-covered tree trunk.
All at once the unearthly screams of a woman filled the woods, followed by shrill screeches. And from nowhere, owls flew at me. Flapping their wings, snapping, pecking at my arms. I tried to knock them away while the woman’s screams went on and on. I turned again and ran blindly, going left and right, anywhere to get away from the owls. But they followed, wings fluttering, talons gnashing in the dark. I felt their beaks stab my cheeks and nose, tear the flesh on my arms, my back, and thought my end was near. I fell to the ground and lay there with my arms covering my face. And suddenly, they stopped. Slowly I removed my arms from my face and opened my eyes. The owls were gone.