You are here: Home / Fiction / Fantasy / Order of Britain: The Devil’s Regiment by Ben Myatt 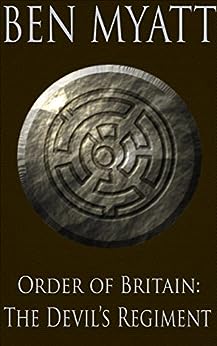 The First Novella in the Order of Britain series:

Callum Drake, a half-dragon mage, is recruited into the Order of Britain – a special branch of Britain’s Guild of Mages. As their first mission, the members of the Order are dispatched to a remote fort in India, where British soldiers are under siege from a force of demonic redcoats.

Callum and his companions, Elizabeth and Nathaniel, must use all their wits and abilities to survive and defeat the Devil’s own Regiment!

What Inspired You to Write Your Book?
Well, the characters started as bit-part players in my High Moon Rising Series, but I rather liked them, so I decided to bring them out to play on their own as well! I’ve always loved fantasy writing, but I’ve never really tried it in a Victorian environment, so this allowed me to stretch my proverbial legs, creatively.

How Did You Come up With Your Characters?
Some of them I came up with as side characters for my other series, but the idea of a half-dragon special agent appealed to me – sort of a James Bond with magic. Theres lots of room to, play with these characters, but the primary goal was for them to be different from the werewolf gunslinger character in my other stories!

Book Sample
Perkins wiped the sweat from his brow, and pushed his helmet back down onto his scalp. He cocked one eye at the unyielding sky, and cursed.
“That’s enough of that, private.” Sergeant Mortimer snapped. Perkins glanced at the man, squinting against the blazing sun. Somehow, Mortimer looked as if he’d just stepped off the parade ground, his red uniform clean and bright, his face dry.
“Sorry, sarge.” Perkins murmured.
The sergeant was staring out into the scrub lands around the fort, his eyes sweeping for enemies. Perkins took a moment to crouch behind the battlement, leaning his Henry-Martini rifle against the stone wall.
“Oh, don’t mind me lad, I’ll just keep watch on me own, shall I?” The sergeant griped. Perkins grinned up at him, and lifted his canteen from the floor, taking a deep drink of water. He passed the canteen up to the sergeant, who winked at him and took a drink.
“Do you think they’ll come again?” Perkins asked.
The sergeant stood silently for a few moments, glowering out into the sparse vegetation.
“I reckon so, lad. Don’t reckon they’ll stop coming.”
The private levered himself to his feet, and hefted is rifle up to his shoulder.
“What do you think they want?”
“Blood. Vengeance. Death. Whatever it is, they haven’t got it yet.”
Perkins grunted, his eyes scanning the terrain.
A shimmering wave of heat swept out of the desert. The two soldier glanced at each other, and hefted their rifles.
“Here they come, lads! Make yourselves ready!”
The British soldiers rushed to the walls as the heat haze began to coalesce and solidify into the forms of men.
***
Callum leant on the balcony of his apartment, and stared down into the bustling streets. He slipped a cigarette into his mouth, and held up a finger.
A bright orange flame kindled into life, flickering at the tip of his hand like a tame insect. He touched it to the end of the cigarette, and drew in, relishing the warmth. He watched the people going back and forth moodily, his eyes flickering from blue to red-flecked green in the light of the embers. He rubbed a hand across his bald scalp, and blew the smoke out into the night.
“You know, gentlemen smoke pipes.”
He glanced over his shoulder at Elizabeth Cartwright. The slim mage strolled into his apartment – as usual, uninvited – and sat on the wooden stool he kept on the balcony, crossing her long legs in front of her. Callum watched her from the corner of his eye, admiring the fall of her rave black hair across her shoulders.
“I never made much claim to be a gentleman.”
His voice was neutral, unaccented and smooth. It was the voice of someone who never spoke unless they had something to say – but when that time came, he expected people to listen.
“I don’t see how you can make much of claim of being anything.” She said primly. Callum shot her a grin.
“Why is it you’re here, Elizabeth?”
“I came to check on you. You’ve not been very sociable since we came over from America.”
“I haven’t had much reason to be. Various members of your society have made it abundantly clear that they want nothing to do with me.” He took another drag of the cigarette. “One of them even implied I was better off being drained to feed vampires.”
“Is that why Montague is in the infirmary, nursing a broken nose?”
“That wasn’t my fault.”
“No?”
“He moved. I was aiming for his eye.”
She rolled her eyes, and stood.
“Well, it’s good to see you still have your sense of humour. Come along, Clarence has a job for us.”

Buy Order of Britain: The Devil’s Regiment On Amazon