You are here: Home / Fiction / Historical / Oranges for Christmas by Margarita Morris 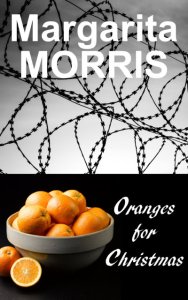 The War is over, but for Sabine the fight for freedom has only just begun.

1961. The Cold War. Berlin is an occupied city – the Western Allies in the West; the Soviets in the East. Berliners go about their daily lives as best they can, until one day they wake up to discover their city has been torn in half by barbed wire – great tangled coils of it snaking through the city. Within days East German soldiers are turning the barbed wire into a solid wall. The Berlin Wall.

17 year old Sabine lives in East Berlin with her mother and younger sister. Sabine’s brother, Dieter, lives in West Berlin. The family is divided and they have no hope of being reunited. The only answer is for Sabine, her sister and mother to escape Communist East Berlin. But the Berlin Wall is guarded by armed soldiers who are operating a shoot to kill policy.

To make matters worse, everyone in East Berlin is under surveillance by the secret police, the Stasi, and the smallest error can have you arrested and interrogated. Even imprisoned.
Can Dieter find a way to get his family out of East Berlin? Can Sabine escape the clutches of the secret police? Can she lead her mother and sister to safety? And who, amongst her friends and neighbours, can she trust?

The War is over, but for Sabine the fight for freedom has only just begun.

What Inspired You to Write Your Book?
I studied German at University and in 1987 I was fortunate to spend three weeks in Berlin. I stayed in West Berlin but also visited East Berlin. This was when the Berlin Wall was still standing and Germany was two separate countries. I took the underground train from West Berlin to Friedrichstrasse in the East, travelling through ghost stations that were manned by armed border guards. This was the Cold War for real. The difference between the affluent West Berlin and the grey, run-down Communist East Berlin was only too obvious. It was this experience of visiting a divided city that inspired me to write Oranges for Christmas. The Berlin Wall stood for 28 years and separated friends and families from each other. Hundreds of people died trying to escape from East Berlin to the West. This book is my response to that terrible time.

How Did You Come up With Your Characters?
I wanted my characters to come across as real people, so I imagined an ordinary family separated by the Berlin Wall. Sabine, her mother and sister live in East Berlin, but their older brother, Dieter, has moved to West Berlin. This was perfectly possible before the Berlin Wall was built in 1961. In fact, one of the reasons that the East Germans built the Berlin Wall was to stop young, educated people leaving East Berlin. There are two narrators in the novel – Sabine in the East and Dieter in the West and the chapters alternate between them. This was a deliberate attempt to emphasize the divided nature of the city. I also wanted to make the novel accessible to teenagers, so Sabine is seventeen years old, and Dieter is in his early twenties.

Book Sample
We leave the train along with the other dozen or so passengers. They are as confused as we are. A man says something about a radio announcement this morning but I don’t catch exactly what. We head towards the exit. A large crowd has already gathered in the station concourse. Everyone is talking and shouting at once. I hold onto Brigitta’s hand because I don’t want to lose her in the crowd. We squeeze our way to the front. I see a uniformed S-bahn employee trying to make himself heard above the noise of the crowd, and gesticulating with his hands. I make my way towards him, dragging Brigitta in my wake. I have a bad feeling about this but I don’t want to say anything to Brigitta until I’m sure. When we are close enough I hear the S-bahn employee telling people to go and buy a newspaper if they want to know what’s going on. Some people have already done so and are waving copies of Neues Deutschland around, crying and shouting. I go cold all over when I hear what they are saying.

“Mit Stacheldraht!” cries a woman, tears streaming down her face. With barbed wire!

About the Author:
Margarita Morris was born in Harrogate, North Yorkshire. She studied Modern Languages at Jesus College, Oxford and then worked in computing for eleven years before leaving to work with her husband on their internet business. She enjoys writing historical based fiction set in interesting places, such as Berlin which she first visited at the age of 19. When she’s not writing she enjoys singing with an Oxford chamber choir and working in the garden. She lives in Oxfordshire with her husband and two sons.