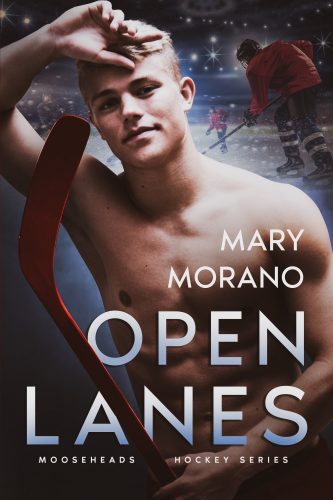 Brayden
My dream has always been to go pro, but in that dream, she’s standing beside me. I messed up my chance once before but now I have a second chance. Just like on the ice, I will do anything I can to win. This time I’m playing for keeps.
Nicole
He tortured me through High School, followed me across the country to college, and now I am stuck in a car with him for five long days. All I want to do is get home and go back to pretending he doesn’t exist. If only my stupid hormones would get on board with the plan.

What Inspired You to Write Your Book?
I wrote this book after going through old picture albums and remembering all the fun trips we had as kids. I realized that this would be the perfect set up for a romance novel, and the idea just rolled on from there.

How Did You Come up With Your Characters?
Honestly, these characters came to me in the middle of the night. I had them in my head for a few years, not really sure how their story was supposed to play out, and then suddenly it hit me.

Book Sample
Prologue
April – Senior Year of High School
Nicole
Thirty-five more days. Only thirty-five school days left until graduation. Thirty-five days and I no longer have to deal with these idiots I go to high school with. Thirty-five days is nothing. I can do this.
I drop my bag onto the purple comforter that covers my bed, ignoring the latest fake admirer letter I found in my locker today as it spills out of the side pocket. I walk the five steps over to my bedroom door and pull the number thirty-six off my handmade countdown, physical proof I survived another day. Balling it up, I shoot it like a basketball and watch as it lands a good foot and a half from the garbage can. Figures, sports were never my thing.
Despite the fact that I still had homework to do, I sat down at my desk and opened my laptop, intent on finishing what I started last night. I had to peel myself away from the story I was writing when I was unable to keep my eyes open any longer, even though the characters have been distracting me all day.
The computer loads and I take a minute to stare at the Monroe Mooseheads logo that I had set as my background. Since the first time I realized that you could give the characters in your head a voice when I was a third grader, I dreamed of being a famous writer one day. I spent seventh grade researching colleges and realized that one of the best writing programs in the country was located at Monroe University in Maine, and that my favorite author taught there. If that isn’t fate, I don’t know what is. From that moment on, my focus was getting into that school. My eyes shifted to the acceptance letter hanging on the bulletin board above my desk that bore the same logo. Only a few more months and I would be away from all the drama of high school, my ex-best friend who liked to find ways to torture me daily, and his minions who followed him without question. A smile spread across my face as I dreamed about college life.
“Nicole!” My mother’s high-pitched voice yells from the bottom of the stairs. “Come down here we have great news!”
With a sigh, I closed my laptop, these characters would have to wait a little bit longer because I knew she would just keep calling if I didn’t come downstairs.
As I reach the bottom of the stairs, I hear the excited voices of my mother and her best friend, also known as our neighbor and my ex-best friend Brayden’s mother, coming from the kitchen. Dread fills my body and my stomach starts to churn. The two of them have no clue how bad things really were between Brayden and me, so they were constantly trying to get us together. I had thought the worst was over after the prom incident last month, but apparently that wasn’t the case.
I paste on a smile, knowing it was better to smile and nod, then get out of dodge when it came to whatever plan they had concocted this time. With a small pep talk, a fake smile, and my shoulders pulled back, I stepped into the kitchen to face them. Only they weren’t alone. No, there sitting at the counter was none other than Brayden with a huge toothy grin on his face. I faltered and looked around to see not only our mothers here, but our fathers too. The weight in my stomach grew heavier as my mind raced to find a reason for this impromptu gathering. Obviously, it wasn’t anything bad, they were all smiling. Maybe he had gotten drafted to the NHL and was leaving today. I could smile about that too.
“Oh, Nicole! We just got the best news! Brayden wanted to wait until it was officially announced and everything was signed before he would say anything to you! But this is just amazing! It’s like fate.” She was rambling, her hands clasped together like this was the most fantastic news she had ever received. Despite the fact my body was preparing for the worst news ever, my mind held on to hope that it really was good news.
“What’s the news, Mom?” I cut her off, unable to take anymore of the anticipation she was building.
“I was recruited by Monroe University to play hockey for them. I’m going to be a Moosehead. We’re going to college together.” His deep voice echoes through the kitchen as if it was an empty cave. His smile kept getting bigger as I stared at him in shock.
Oh. Hell. No.