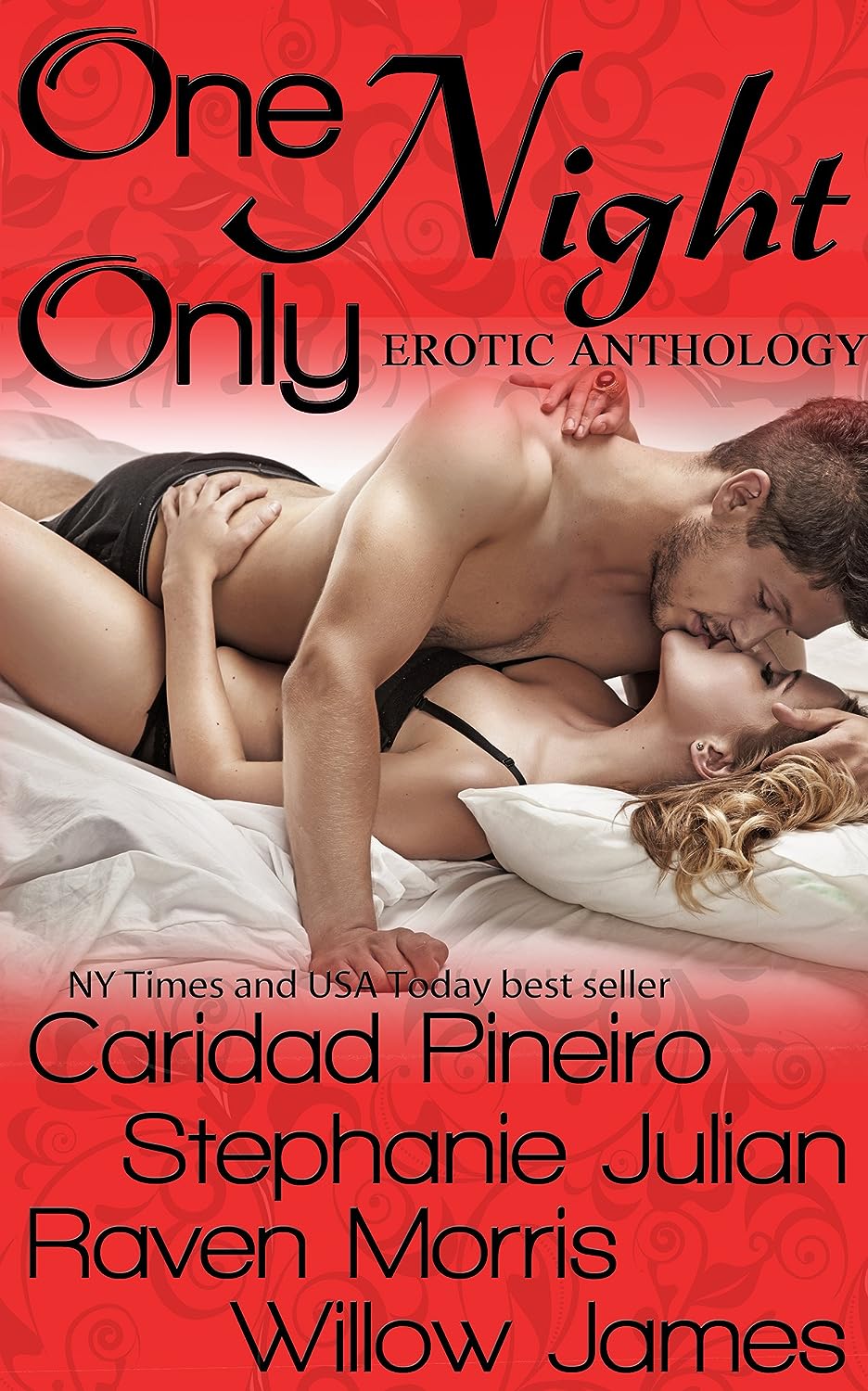 99 cents for a short time

JUST ONE NIGHT by NY Times and USA Today Bestselling Author Caridad Pineiro.
He has just one night to prove to her that anything is possible …

AN INDECENT AFFAIR PART I by Stephanie Julian
One night. One woman. Two men. Twice the desire.

TYED by Raven Morris
It’s Kylie’s birthday and she’ll do anything to ensure her one night with Ty isn’t a once-in-a-lifetime event… Anything.

PUMPED by Willow James
Skylar Sole’s fantasy becomes reality when the object of her affection shows up with that sexy, lopsided grin and a tantalizing proposition.

He has just one night to prove to her that anything is possible . . .

Jason Hart, Jase to his friends, has just graduated college and earned his commission as a Second Lieutenant in the Marine Corps. It’s the night of the graduation party and she’ll be there. His best friend’s slightly older sister, Nickie. Nickie is the only woman he’s really wanted for a long time. He has just one night to make it happen.

She has just one night before the man of her dreams leaves, maybe forever, but can she find the courage to take a chance . . .

Nicole de Salvo has been in love – and lust – for her little brother’s best friend for years. For years she’s watched from afar and done nothing about her attraction for Jason Hart only now their time together is almost at an end. On their last night together will she find the courage to do something about her feelings, or will she live with regret for the rest of her life?

An Indecent Affair Part I by Stephanie Julian

One night. One woman. Two men. Twice the desire.

Katrina refuses to give in to her mother’s demand to marry a man she can’t stand. After years of trusting no one with her heart or her body, she wants to be swept off her feet, to experience complete surrender, if only for one night.
Tristan has lusted after Katrina for years and tonight he’s making his move. He’ll steal her away from his brother, who doesn’t deserve her. Then he and his best friend, Adam, will give her exactly what she wants…

Skylar Sole is focused on work, getting her degree, and dreams of the future. Men and relationships have never been at the top of her priority list. Besides, if a girl’s got a good vibrator, then why risk a broken heart? The closest thing she has to a relationship is ogling the hottie from the office park who saunters by Stilettos lingerie shop every day on his way to the deli next door. Getting a glimpse of Mr. Wall Street had become the highlight of her work days and he had become the star of her fantasies. However, one Sunday afternoon, fantasy becomes reality when Mr. Wall Street shows up at Stilettos with that sexy, lopsided grin and a tantalizing proposition.

Eight years ago, Kylie’s birthday present to herself, a one-night stand with the hottest guy on campus, was a night to remember. Which was why she snuck out before he woke up—why ruin a good memory with the morning after?

But she’s never forgotten him, so when she sees Ty in an airport, she wouldn’t mind finding out if that night was as good as she remembered…
But will Ty?”

About the Author:
“NY Times and USA Today Bestseller Caridad Pineiro is a Jersey Girl who just wants to write and have more time to spend with her family and friends. Caridad is the author of over 40 novels and novellas in various genres. http://www.caridad.com/

Raven Morris loves celebrating birthdays. Has she ever received a present like this? Ah, that’s for this fiction writer to know and you to wonder… But instead of wondering about her love life, set your imagination to work on your own. And if her books can help those fantasies along, well, there’s always a reason to celebrate. http://ravenmorris.wordpress.com/