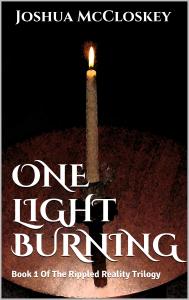 In a small town named Gordonville Pennsylvania that Kyle considers nowhere, he lives a lazy life with his father, trying to find him-self. A town whose economy and workforce decimated by losing its main employer of jobs there is not much work to be found. In turn, there is not much for a high-school drop out to do. It is a boring and monotonous existence for a young adult. Going from job to job, just to get by, he finds himself in the same rut as every other kid his age.

Most of his free time consists of playing poker with his friends and coming up with elite schemes to scam people out of their money. Something however, was about to change his life forever, and draw him ever closer to the only person he feels he is close with an older girl named Alicia.

The day before his eighteenth birthday, an unruly discovery of an abnormal ability he did not ask for reared its ugly head shaking up his world forever. Out of nowhere, he could now see the living future of random objects and things in a ghost like form ahead in time of their true selves. As if his life was not complicated enough having a mother who passed away five years in the past, and a verbally abusive father, who spent more time running a hole in the wall tavern than take care of him, it just got more convoluted.

The epiphany of this new-found ability occurs before a terrible accident transpires. A confused and bewildered Kyle questions why he was unable physically to use evasive actions to avoid what he knew was going to happen. Blaming himself for what happened, he delves into a deep dark path of questioning his realities and philosophical reasoning behind his new rippled reality.

“One Light Burning” is a fast-paced science fiction thriller, from start to finish with a deeply entrenched story of a young adult dealing with having lost his mother, a verbally abusive father, love, guilt and a newly acquired paranormal ability of his mind’s eye he does not understand.

What Inspired You to Write Your Book?
Watching re-runs of television shows, like the Twilight-Zone and Star Trek, I’ve always wanted to write my own books with complex characters that show strongly expressed emotions, in a science fiction setting. I feel like the more you can show what the characters and thinking and feeling and going through the more the reader is going to relate to them and care about what is going to happen to them to keep them hooked on reading the story to the end,.

How Did You Come up With Your Characters?
When I am writing I always imagine in my head what my characters would look like in real life. Visualizing how they would sound, and interact with the events unfolding in their life I really try to delve deeply into what they are thinking and feeling. Most of the characters I come up, stem from someone I knew or grew up with. Some our totally made up from the ground up however.

Book Sample
Speeding up, he decided to head back home. It was about eleven thirty and his father would be opening up The Whiskery soon anyways.
It was at that moment his eyes noticed some type of abnormal, blurry ghosting.
“What the hell?” he muttered in disbelief.
Upon closer examination it appeared to be a ghosting image of his car right in front of itself. The image was fading in and out like a bad television signal. Not understanding just what in the hell he was seeing he freaked. Hands trembling at the intensity of the impending doom of finally losing his mind he started closing his eyes and reopening them. It was of no use; no matter what he did he could not rid the fuzzy ghosting he saw, it just continued gyrating in front of his car.
Everything around him seemed to slow down. As if something bad was about to happen in the next few seconds. The feeling of nirvana, swirling around his being overwhelmed him.

About the Author:
My fascination with writing started at a young age. I remember in school filling up the unused portion of spiraled notebooks with abstract ideas and stories. Being a very lucid dreamer, a lot of my ideas and characters come from dreams that I have had that I wrote down.
My writing style is one that creates a complex plot, but one that melds together and all its parts make sense. Detailing characters feelings and living through their viewpoint, at a mysterious pace, revealing little by little just how everything fits together keeps a story interesting throughout the entire adventure.