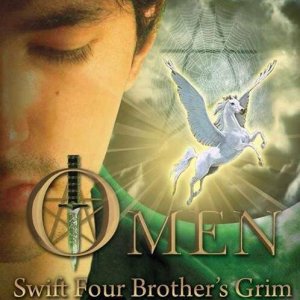 In the most ancient orphanage of Edinburgh, ruled by the wicked and governed by the determined, Omen Swift is yet to unveil the past he never knew could exist..

Far From Par Sleeper’s Wood , is happening, its a thrilling place to be in for any fourteen year old , who doesn’t want to live the life of the ordinary, amongst the normal folks, resides the Ape Monks and hags protecting the secrets of the gypsies fire blazing stage acts to whisk the folks away from their mundane world. There’s Christmas And Halloween that boasts cloaked Jack O Lanterns with pumpkin’s for heads.. and a few tricks up their sleeves, There’s the prominent Native Indians from the Amatiki Tribe in the School Of Goth’s Museum.

Above it all rules the beautiful gatekeeper of Far from Par, Edanessance, living as a recluse, hiding behind a mask, watching over Omen. Protecting Omen from the vendetta the Nature Controlling Wiccans have over the Illusionists.

But the wiccans have demanded Omen back, before the illusions were done, after the bad gained dominance, The wiccan web strands representing the life span of a Pagan is limited to Omen, But some injustices don’t last long in the system… Not until the ruthless steps up.

What Inspired You to Write Your Book?
Many things, like my dad’s illusionists hobby in the past have inspired me to write the Omen Swift series, While I was growing up my dad used to introduce me to certain politics, religion and the art of illusionists living in India and New York. It never occurred to me , when I was seven, that he would bring light to all the main elements of what I would write about when I turned seventeen. The Omen Swift series has shed light on the history of Wiccans and Native Indians, and how people can misinterpret a certain belief or cult for what it really is. I personally am a big fan of ancient gothic history and its
museums, all of which provided the settings I needed in which to build the vivid world in which Omen is sent to live in.

How Did You Come up With Your Characters?
Simple. I just created them in my head. As they came along I dream’t up what they were like, and the conflict they would face in a world in which they belonged to. Every thing has a reason to happen at a certain time and Omen Swift is no different. The type of settings and issues the Characters face, provide reason for personality traits in the people I draw up.
In the Omen Swift series there is no shying away to prejudice and family conflicts. All this provides a sense of purpose and strength to the characters I draw up.

Book Sample
Omen Swift has no idea just how different his background really is … from what he thought it was.
That’s all thanks to the blackmailing, manipulating owners of the orphanage , in which he and the Gemini Brother’s were sent to live in as refugee’s . But all bad things change for Omen when a mischief prone wood nymph summon’s Omen to retrieve the fate that was bestowed upon him, and find the justice his gypsy/illusionists parents deserve. How hard can it be to leave the horrible orphanage and seek solace in the world where his real family history lies right? … from the off guard manner in which he was thrown into “Far “From Par” dominated by the nature controlling Wiccan followers and diverse Native Indians, Ape Monks that protect the gypsies from the Pagan Followers, Omen and The Gemini Brothers take the test to enter their fascinating past, and adventurous rides and thrills in both Sleeper’s Wood and Christmas & Halloween, an event created by the gypsies. With Hags shielding the illusionists make belief stage acts , to whisk the citizens away from their mundane worlds, to Omen finding out he was made a Wiccan but banned from using what he possesses, to Omens sister trying to upstage him, Omen finds out it’s not just the real world that’s bad. … any place could be just as amazing, thrilling and spell bounding …..or worse..

About the Author:
Born in New York.. Living every where.

Author of The Chronicles Of Omen Swift Series.

C.K Thornehill is the Author represented by Bond Literary Services.

Currently the only thing she carries around when not writing, is a book.. and a Mac Book Air..

There are two more series after the Omen Swift Series.