You are here: Home / Fiction / Romance / Off the Record by Reese Patton 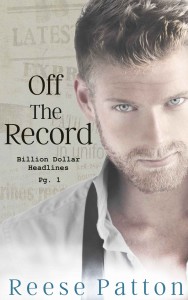 Never a good combination when found in a man – and Ian Stirling, publisher of the Daily Herald, possesses all of them in excess.

Merideth Gardner leaves her interview at the Daily Herald ready to give up on her dream of working for a daily city paper when fate intervenes. All she has to do is help Ian convince his grandfather that he’s given up his philandering ways.

Seven days. She only has to pretend she’s in love with Ian for seven days. And on the seventh day she’ll get her prize – a place on the features desk.

It’s a simple business transaction. An exchange of services. But then the story changes and Merideth finds herself doing the one thing she knows she can’t do – she falls for Ian.

Will Ian go on the record with his feelings for Merideth? Or is their relationship destined to be off the record?

The Billion Dollar Headlines series delivers a short and sexy novella to your doorstep every two weeks. Perfect for when you want a hot story but don’t have a lot of time. Read Off the Record while it’s Hot!

Introductory price of .99 for the first month!

What Inspired You to Write Your Book?
I loved the idea of writing a book focusing on the Billionaires who were always billionaires. It was actually an old documentary I saw on HBO that really pushed me. Listening to the Whitney heir talk about finding satisfaction in working and not in the size of his bank account and being sincere in his declaration pushed me.

How Did You Come up With Your Characters?
So, the Whitney heir sort of dictated the idea of a man with a huge trust but found satisfaction in running the paper. And that started Ian Stirling’s character. From there, his friends emerged and the next thing I knew Ian was the heir to a publishing empire.

Then the character of Merideth came about. I needed an intelligent woman who wasn’t focused on the social or gossip pages. She also needed to not be impressed by Ian. (And she isn’t, for the most part…)

The next book in the series is in its editing stages, and it still focuses on Ian and Merideth, because they really are so much fun to write, but it is also the start of Stone’s story and the woman whose presence will change the carefully planned trajectory of his life.

Book Sample
The image of Merideth swinging her fist right at Ian’s cheek flashed through her mind. She wasn’t normally a violent person, but something about the man in front of her pushed at her buttons. “Well then, I suppose I can walk out of your office and out the building without consequence.” The only thing preventing Merideth from doing just as she said was her curiosity. She didn’t think Ian Stirling beckoned her to his office just to question her decision to interview with the entertainment division of his own newspaper.

“Just ask her already, Ian, before she takes a swing at you. Which she’s going to do anyway once you make you make your offer. You don’t want to get hit twice.” Jason piped up from the couch and this time Merideth craned her neck around and narrowed her eyes at him.

How had he known she fantasized about hitting Ian?

“Merideth.” She responded without any thought.

Ian stretched out in his chair and Merideth couldn’t help but notice his nicely toned body. It was too bad his body was attached to his mouth.

“I have a proposition for you.”

Merideth blinked her eyes once. Slowly. “What are the parameters of the proposition?”

Once more Jason snickered behind her.

“My grandfather is arriving tomorrow and will be staying for one week.”

Again, Merideth blinked her eyes slowly. “And I should be interested in this because?”

“He hasn’t been pleased with some of my decisions lately.”

This time instead of snickering, Jason snorted, as though he was trying to stifle laughter.

“If you agree to assist me for the duration of his visit, I will guarantee you a position at the national news desk.”

Merideth was positive she didn’t hear Ian right. She could have sworn he promised her a coveted position at his newspaper if she agreed to be his assistant for one week. “I’m not sure I’d make a very good assistant.”

The guffaw coming from Jason echoed around the room. Apparently, he was past trying to hide his amusement.

Ian raised his eyebrows and almost smiled at her. “I believe you’ve misunderstood me, Ms. Gardner.”

Buy Off the Record On Amazon