You are here: Home / Fiction / Of Gods & Dragons by Charles Habakkuk 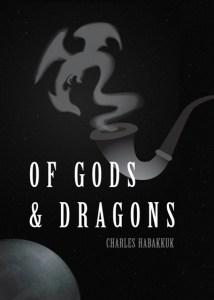 Byron is a husband, a seminarian, a sandwich maker, a Moon-landing enthusiast, and a liar. For eight years, he’s hidden a dark past threatening to drag him into insanity. He uses an obsession with the Apollo Moon landings and his religion to avoid a confrontation with that past, but it’s beginning to overwhelm him. He needs something stronger. And then, as if by providence, he is invited to play a tabletop fantasy game. The fantasy allows him to step into another world and live as Brodo, a Hobbit who is better equipped to fight demons of depression and suicide.

Of Gods & Dragons is literary fiction, a biting response to the genre of Christian fiction, about a man who only wants to live another day. It deals with sexual abuse, mental illness, racism, gender issues, philosophy, evolution, religion, and anti-theism. It is written to make the reader laugh, cry, and think along with Byron as he struggles against himself and either the higher power that put him here, or the black specter of oblivion haunting all men.

What Inspired You to Write Your Book?
I deal with mental illness on a daily basis, and it’s been getting worse as the years wear on. Writing Of Gods & Dragons helped me communicate what it feels like to live with this disease. It also became a conduit for my anger and frustration with God, and allowed me to say what I couldn’t have said myself. The book shows how fantasy, religion, and medicine can be tied up together in a messy knot and either help or destroy a man.

How Did You Come up With Your Characters?
Byron is a fictional character, but his experiences are very close to my own. His obsessions, his fears, his struggles, and his faith all mirror what I’ve experienced as my illness has gotten worse. Byron’s wife is also his foil. Her togetherness and focus contrast sharply with Byron’s distracted personality. Dirk, Byron’s best friend, fantasizes as much as Byron does but he keeps his fantasies shallow and darkly comedic, which highlights how and why they’ve become such close friends. Kyle is an atheist whom Byron treats like a religious prophet, despite his problematic past. Richard is Byron’s closest Christian friend, whose childishness is treated as a positive aspect in Byron’s mind. Byron’s boss, Dan, is kind of a conglomeration of all the abusive people I’ve been forced to work with.

Book Sample
I asked for help once.
It was a bitter day in February. The previous week’s snow had steeled in a polar wind, leaving crusts glazing every blade of autumn grass. My room’s windowsill creaked beneath a burden of ice. The Moon dribbled through cracks in the trees, casting its glow upon my face and forcing childhood memories to surface while I lay awake.
Sleep often eluded me, but the worst insomnia always took hold when the Little Whisper beckoned during the winter months. That mumbling presence seemed to know that sleep, above all, was my most potent weapon. A buzz poured into my room and assaulted my ears. I slapped the alarm clock as if fending off a mugger. I sighed into my pillow.
Something crept down my neck—a bead of water. I found I was sealed inside a blanket of cold wetness. My bangs stuck to my forehead like saran wrap, and my eyebrows dripped with sweat. I sloshed in the sheets until I found the edge of my futon. I stood. My head spun for a moment, as if on the edge of drunkenness.
The world righted and I stepped forward. I’d learned to manage the shifting wobble of sleep starvation, but I knew today was going to be difficult. The task became harder as my body and brain grew out of youth. The cold air tussled against my wet skin. I shivered.
Twenty minutes later I walked out of my father’s house and crunched across a layer of ice. A chill wind bit through my coat and licked against my arms. I scraped my key against my car’s lock. The engine roared and the heater blasted. It would take a while to melt the frost from the windows, so I buckled my safety belt and waited.
The Moon burst with its fullness. I ducked my head to look at it through the windshield. Crystals of frost distorted its shape, but it cascaded cool paleness on my face. I challenged myself to notice its movement across the face of the sky. I picked a single tree’s twig scratching upon the Plain at Tranquility, and watched as it passed into the Plain of Serenity, and then the Sea of Storms, and finally off the disk of the Moon itself.
By that time I only had a few minutes to get to work. I drove empty roads, thinking that somehow stoplights seemed melancholic when they flashed red repeatedly rather than going through a multicolor progression. As I thought on this, the Little Whisper held off for a while.

About the Author:
Charles Habakkuk lives in Bloomington, Indiana and writes at the crossroads of faith and mental illness. A graduate of the Moody Bible Institute in Chicago, Illinois, he attended Dallas Theological Seminary for a semester before he dropped out to pursue a career in writing. He now writes about the struggles of a small man caught between big ideas: God, evolution, love, oblivion, and death.