You are here: Home / Fiction / Romance / Nights in the Fast Lane by Grace Risata 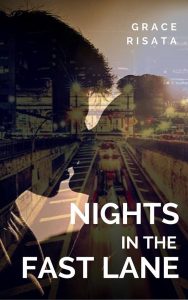 Dane and Izzy.
Complete opposites.
As the New Year begins, they find themselves facing very different circumstances.
Dane is a street racer stuck with a blown engine, no money, and no options after he gets fired for saving a damsel in distress.
Izzy can’t believe she was just rescued by the same handsome stranger she walks past, and lusts after, on a daily basis. With a massive blizzard about to bury the town, she ends up taking him in for the night.
Sparks fly when she brings out his playful side, and he shows her a passion she’s never known before.
As they slowly begin to trust each other, walls come down and tragic pasts emerge. Dane is haunted by the family he never had, while Izzy will stop at nothing to deny her birthright.
When Dane receives an offer he can’t refuse, will one bad decision cost him everything? Or will fate intervene and send these two down the path they were destined for?
This is a full length, stand-alone novel with no cliffhangers. Please be advised that you will find strong language, attractive men with tattoos, a dog with a cat name, steamy bedroom scenes including one involving Doritos, plenty of character backstory, and a very healthy dose of humor.

What Inspired You to Write Your Book?
Believe it or not, I was out playing in the snow with my dog after a major blizzard and watching her happily chase after snow balls and try to catch them. I asked myself if there was a book I could write about the snow storm and a plot slowly began to form in my head. I added an alpha male, a feisty heroine, and a dog with a cat’s name. Viola! Nights in the Fast Lane was born!

How Did You Come up With Your Characters?
I came up with characters by letting my mind wander to come up with their back stories. I always write down timelines and ages and fact check to make sure I’m not contradicting myself or having any plot holes.

Buy Nights in the Fast Lane On Amazon