In Mystekal, a small, dying town in the Southern California desert, only 75 students attend the old, sometimes creepy high school dubbed “Mystical High,” where strange things have been known to happen. Jessie Dalworth and Jinxsy Patterson are juniors and lifelong best friends. At home, Jessie deals with the pain of an absentee mother who has abandoned the family for the lure of Hollywood; Jinxsy contends with a 17th “birthday present” she never wanted or expected.

Meanwhile, at school, the unexplained activity begins to escalate when Jinxsy keeps seeing a long-haired guy in the hallway checking her out. Jessie can’t see him, but her younger brother, River, can.

Then, in English class, a stapler mysteriously flies off teacher Eve Carrow’s desk, hitting a student in the face who has just mouthed off to her. The beloved teacher is in the unenviable position of having her brute of a father as principal, so she hates sending any student to his office. As Principal Ernest Carrow begins to terrorize Eve and others more openly, something or someone unseen decides that it’s payback time.

School is getting stranger, and Jinxsy and Jessie are faced with mind-boggling changes in their home lives that complicate everything. When a string of shocking events expose explosive secrets, decades-long mysteries are finally revealed. 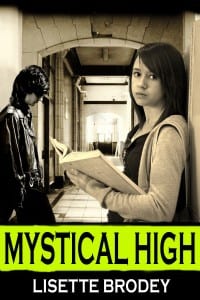 How is Writing In Your Genre Different from Others?
In writing YA, there are more language restrictions than when I write for primarily an older audience. I have to be careful with the characters’ choice of language and the words used in the narration as well. I’m also more conscious of the messages that I’m putting forth in my story.

What Advice Would You Give Aspiring Writers?
Every writer was once an unpublished writer. I know that most authors offer the same advice, “Write, write, write,” but it makes sense. Remember this: you can’t edit a blank page. Even if you don’t like what you’re writing, keep the words coming. Don’t ever forget that great ideas often evolve out of bad ones and that your skill will grow with experience. Just keep writing, and remember that you’re accomplishing something wonderful just by not giving up.

Author Bio:
Lisette Brodey was born and raised in Pennsylvania. After high school, she moved to New York City where she attended Pace University and studied drama. After ten years in New York, several of them working in the radio industry, she moved to Los Angeles, where she held various positions at Paramount Studios in Hollywood and CBS Studio Center in Studio City, CA. Back on the East Coast, she worked for many years as a freelance writer, specializing in PR and the entertainment industry.

In October 2013, Lisette’s fourth novel, MYSTICAL HIGH, book #1 in a YA paranormal trilogy, The Desert Series, was published. In January 2013, the author edited and published a book of her mother’s poetry (written 50 years earlier) called MY WAY TO ANYWHERE by Jean Lisette Brodey. The author’s office website is: www.lisettebrodey.com. In addition to information about her books, Lisette blogs, hosts guest bloggers, and interviews fellow authors on a weekly basis.

What Inspired You to Write Your Book?
I’ve always had a great interest in (and some experience with) the paranormal. I wanted to write a paranormal novel that was realistic as well. Living in southern California, I had a great desire to write a story that took place in the desert. When I finished the book, I was so excited about it that I decided it needed to be a series. MYSTICAL HIGH is book #1 in my YA paranormal trilogy, The Desert Series.