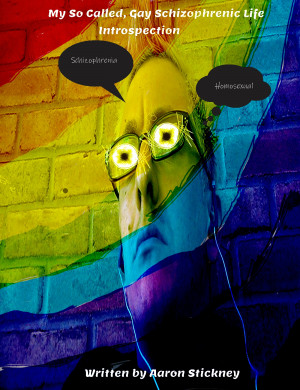 This book follow my journey through the years of 2012 up to 2018. Here I describe what it was like dealing with issues of my mental health disorder, Schizoaffective Disorder and other various facets. Which includes sexual harassment in the work place, religious facets and other factors.

Targeted Age Group:: 14 and Above

What Inspired You to Write Your Book?
What inspired me to write this book was that we all have a voice in life but some of us don't wish to share their stories or also don't have the courage to do this. Whether it be out of being ridiculed and other various factors. Anyway, I wanted to share my story to inspire those with similar issues and also stop the stigmas of mental health disorders and those of LGBTQ community.

Book Sample
I honestly do not know where to begin with this book and even how to being writing this very chapter. Alas, we will being and I hope you do enjoy what you read. This is not going to be easy for myself because it always bring painful memories when I reflect on them but I think that is truly the meaning of life! To learn from out past mistakes and to grow as a better person as a whole from that point onward. While sometimes it may seem like the troubles we are going through are as tall as a mountain. We need to look at the bigger picture of life and the journey over the mountain is the story we will tell one day.

I want people to get a better understanding of myself and my mental health disorder. Upon further reading you will discover what that disorder is and also you will discover many other facets of my life. For years I have battled many personal demons. It took many years away from my life, which I know I can truly never get back. I lost so much precious time that it pains me just thinking about it. However, what I know now is we can truly never allow ourselves to wallow in the pains of the past and only use the past a lesson and stepping stone.

For, the most part of my life, I knew I was different from everyone else. It started at a very early age and I cannot remember exactly when these thoughts surfaced in my mind. I have a very vague memory from when I was extremely young. I would lie on my couch in my house. I would tightly hug a pillow close to myself and imagine this pillow was cuddling me back. I was at an age where I could not even grasp the full concept of what a cuddle meant, but I knew it was not a foreign idea. What made this concept unique was this pillow was actually a male cuddling me. If I had to guess, I would say I was around six or seven at that time. To think that a kid at that age would even remotely have the concepts of affection like this was odd. To think about the same sex that way at that age would also be seen as an odd concept. It was not like I was taught this by my environment nor was it taught to me by family.

Why? This was around the late eighties and early nineties at a time when homosexuality was seen as very taboo. Homosexuality was seen as such a taboo at those times that you would never really see anything like what we do now within mainstream society. To a degree, that if you saw such a LGBTQ figure in mainstream media it was a caricature and a flamboyant mess. It was not until I was probably around twelve or thirteen, that I knew after learning from my environment what it was to be "different," and how being different was not something I should be thinking. I did go to church from time to time during this period but I never regularly went. I know what you are about to read further on if what truly happened was divine that it just proves that to be connected to a higher power. One does not simply have to go to a congregation to worship such a entity.

I digress, going back into the swing of things. It was around this time in my life I began to develop feelings for guys my age. To be honest this frightened me, because of the stories of Brandon Teena and Matthew Shepard. While that was a factor in me hiding who I was for years, it was not just the sole reason why I could not fully admit to myself I was different.