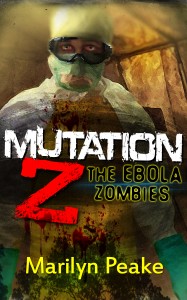 Ebola, one of the most feared of the hemorrhagic diseases, has begun spreading across the borders of West African countries. The CDC and the World Health Organization have admitted they are losing control over the disease. Some hint at a possible worldwide pandemic. At exactly this point in time, Emma Johnson graduates from nursing school. She takes a job in an Ebola treatment camp inside Liberia, West Africa. The camp is state-of-the-art. It’s run by the CDC and the World Health Organization, and protected by the U.S. military. Emma uncovers a secret about this facility: medical experimentation is being conducted along with treatment. Whether or not Emma can ever escape the camp, she’s determined to get the story out. She has intimate knowledge of a biological horror being secretly unleashed upon the world. SHORT STORY. GENRES: Apocalyptic Science Fiction, Zombie Fiction, Conspiracy Fiction, Horror.

What Inspired You to Write Your Book?
Following the real-world news stories about the growing Ebola epidemic in West Africa, I wrote a fictional story based on the horror surrounding those events.

Book Sample
Dr. Steele and two interns (God, what a place to intern!) demonstrated how to put on and take off protective gear. Then assistants helped us suit up. Protected from virus, we looked more like astronauts on an alien planet than medical personnel about to help patients. We no longer seemed human.

Dr. Steele said, “Today, you are going to meet patients. Tomorrow, your medical training and direct work with patients will begin.”

As we lumbered across the path toward Building 5, Zoe’s Oriental eyes loomed large through her clear plastic face mask. She reminded me of a gargantuan insect with dark nervous eyes.

Inside the treatment facility, patients lay listless on hospital beds spaced evenly along both side walls and separated by plastic curtains. Several female patients wore brightly colored dresses. No hospital gowns, apparently just whatever they had been wearing when they arrived. Reading from a chart at the foot of each bed, Dr. Steele explained each patient’s condition and how they were being treated.

Medical personnel moved about the room in suits identical to ours, administering to patients. One stuck an elderly man with a hypodermic needle and drew a blood sample. The sight of that thick red blood, teeming with Ebola virus, twisted my stomach into knots. I felt terrified that I would throw up inside my suit.

The last patient we encountered was a little boy named Akachi Anikulapo-Kuti. Dr. Steele said, “His first name means ‘hand of God.’ Ironic, don’t you think? I don’t believe any God would ever do this to a little boy.” After studying him a moment, she continued, “He’s four years old. Arrived here this morning. He tests positive for Ebola. We started him on an experimental drug from the CDC two hours ago.”

Akachi opened his eyes, noticed us hovering about him in our alien insect suits; then rolled over, away from us. In his arms, he clutched a stuffed bear—so new and clean, it must not have come from home, probably a comfort gift from staff.

Expecting the sick to be writhing in agonized torment, I asked why everyone appeared listless. Dr. Steele explained, “We have them heavily medicated for pain. That’s one of our primary treatments, to ease their suffering.” Her blue eyes brightened behind her face mask. “And we have access to the most powerful pain meds in the world. Our patients are almost always under our control.” I figured she meant “our patients’ pain is almost always under control,” but that’s not what she said. I chalked it up to the sweltering heat under those plastic suits.

About the Author:
Marilyn Peake is the author of both novels and short stories. Her publications have received excellent reviews. Marilyn’s one of the contributing authors in BOOK: THE SEQUEL, published by The Perseus Books Group, with one of her entries included in serialization at THE DAILY BEAST. In addition, Marilyn has served as Editor of a number of anthologies. Her short stories have been published in seven anthologies and on the literary blog, GLASS CASES. AWARDS: Silver Award, two Honorable Mentions and eight Finalist placements in the ForeWord Magazine Book of the Year Awards, two Winner and two Finalist placements in the EPPIE Awards, and Winner of the Dream Realm Awards.