You are here: Home / Fiction / Mystery/Suspense / Murder on Display by Reece Pocock 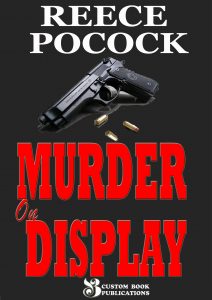 As soon as the Flynn brothers lifted their Glocks, Dan was in trouble.
Silence descended like a cloak of doom. No confusion crossed his mind… it was clear he would die in the next few seconds. In all his years of facing danger, he often wondered how he would react when faced with imminent death. He was about to find out.
He hurled the contents of the pepper shaker into their eyes. The brothers grabbed at their faces. Dan lifted the table in front of him, and charged. Crockery, eating utensils, the bottle of wine, and a vase filled with flowers crashed onto the floor as Dan morphed into a one man wrecking crew. Gunshots… searing pain in Dan’s ribs stopped him, but only for a moment.
One brother collapsed under the timber tabletop; the other fired. Dan heard a cry behind him as he whirled in a circle – his karate kick smashed into the gunman’s face and sent him flying across the floor. The gun slid out of reach. Stomach pain burned and registered in Dan’s brain, but somehow he pushed the hurt away.
With one brother disarmed, he turned his attention to the one who fired into the obstruction on top of him. Bullets crashed through the timber. Dan wrenched the table away, and kicked the gunman in the face. They wrestled with the gun until turned, it fired into Flynn’s chest. Dan jumped up and held the smoking weapon in his hand.
One down… the other gunman moved towards his weapon. Dan shot him. Blood saturated Dan’s shirt and dripped onto the floor. Now pain grabbed at his bloodied stomach. A fractured rib moved. Something warm and bubbly formed in his mouth and forced him to spit; a red glob broke up on the floor. His vision blurred, blood bubbled from his mouth making it difficult to breathe. He crawled to Diane, who lay on the floor in a pool of blood.
He felt for her pulse. None… too late. He wiped at his lips, and pulled his wife to him and buried his face on her chest. Their blood mixed as if they were destined to be together, even in death.

What Inspired You to Write Your Book?
I wanted understand how people react when confronted with danger. I built my lead detective and hoped I could use him again. My killer had Dissociative identity disorder and how to write the psychological minefield with that sickness.

How Did You Come up With Your Characters?
the only way to form characters is to be them in your mind. If you can become a detective I try to get them to do the things they would do when trying the catch the killer. Like wise with the killer, work out what he would do and why.