You are here: Home / Fiction / Mystery/Suspense / Murder, Lies and Chocolate by Sally Berneathy 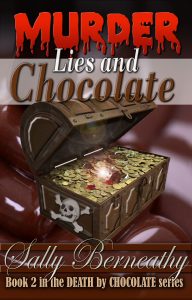 Rodney Bradford comes into Lindsay’s restaurant, offers to buy her small house for double its value, eats her brownies, and drops dead on the sidewalk in front. Then someone breaks into her house and tries to dig up her basement. Next her almost-ex-husband offers to sign the divorce papers, but only if she’ll give him her small, old house and take his big, new house instead.
Suddenly everybody wants Lindsay’s house. Is there oil under the basement, plans to bring the railroad through, pirate treasure buried in the basement? A second break-in occurs and causes her cat, King Henry, to launch into full attack mode, taking a few chunks out of the intruder.
Lindsay enlists the aid of her enigmatic neighbor, Fred, to help solve the mystery while trying to keep her police detective boyfriend, Trent, from getting in their way with his insistence on all those silly cop rules.
On the positive side, sales skyrocket for the special dessert Lindsay calls Murdered Man’s Brownies. Prisoners, murderers, crazy relatives and strippers are all part of the chaos in this second book of the Death by Chocolate series.<
BONUS! Chocolate recipes included. Poison optional.

What Inspired You to Write Your Book?
Since this book is the second in a series, the main characters are the same. Lindsay baking her chocolate, Paula and her son, the enigmatic neighbor, Fred, and the obnoxious ex, Rick. I saw on Facebook an app to determine your stripper name. That was such fun, I decided to bring in some strippers: Bubbles Galore, Tiger Lily, Brandy Fire. And what if Lindsay, who's thin and not well endowed, tried to pose as a stripper in order to find a killer.

How Did You Come up With Your Characters?
This is the second in a series, so the main characters are the same. Lindsay owns a small restaurant featuring her chocolate desserts. I am somewhat famous (infamous?) for my chocolate desserts, so I gave her my trait. Fred, her enigmatic neighbor, was created from a friend I went to high school with who is, well, enigmatic. I saw an app on Facebook to create your stripper name. That was such fun, I decided to add some strippers. Bubbles Galore, Tiger Lily, Fire Dancer, and more.

Book Sample
Paula told me the next morning that we had made the ten o'clock news. They'd featured some great pictures of the cops being interviewed with my sign in full view, and the reporter had mentioned that the dead man's final act before collapsing on the sidewalk had been to eat dessert at "a local restaurant, Death by Chocolate. Appropriate name."
I considered the alternatives…prepare small quantities of everything and pretend all was normal or go with the flow. I chose the latter and made brownies with nuts, dark chocolate chips, semi-sweet chocolate chips and white chocolate chips then layered on thick chocolate frosting and called our special dessert of the day Killer Chocolate.
I made the right choice. We had a big crowd for breakfast and a huge crowd for lunch. Everyone wanted to know what dessert the murdered man had eaten. I finally drew a line through Killer Chocolate and wrote above it Murdered Man's Brownies. Okay, it was a little macabre, but we sold out. It's not my fault if people are strange. I don't judge. I just feed them chocolate.