You are here: Home / Fiction / Mystery/Suspense / Murder By Dissent by Patricia M. Muhammad 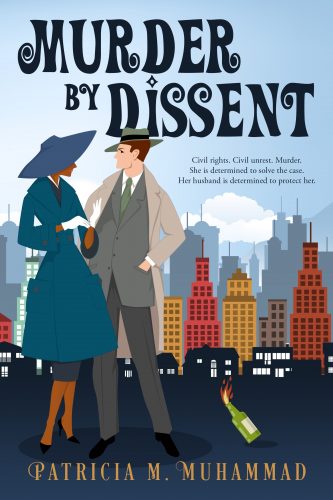 Protests, riots and someone who hides under the flame that scorches the possibility of improving race relations in America during the Civil Rights era. Jacqueline Sadie Thompson is a detective in a coloured precinct in New York. Lieutenant Davidson assigns her and Johnson murder cases which occurred during protests. They visit the scene. Someone tosses a Molotov cocktail where they stand. The building collapses. Thompson’s British husband, William rescues her. Her partner suffers a coma. Johnson awakens. He recalls the disturbing notions his wife had concerning racial identity. Thompson faints at the station house and is put on leave. Her husband cares for her. Anderson, another detective, furthers their investigations. Johnson convinces one of his cousins to retrieve a book. The detective is aloof and does not disclose to anyone what he saw before the explosion. Jacqueline deduces a portion of it. Jacqueline is determined to solve the case. Her husband is determined to protect her. Who do they both need protection from?

Mild note: The protagonist and her husband share intimate moments-often. Although there is only mention of legs, arms, embraces and kisses, the remaining descriptions I use allegory and references to nature to describe their intimacy. This may be considered mild to moderately “Steamy” depending on the potential reader’s inclination.

Moderate to severe discretion (abridged): This book is a work of fiction. However, the author intended to create characters and settings historically accurate to the era it takes place in, the racially tumultuous 1960s. Certain terms used as racial descriptions now considered archaic, outdated or even offensive are used to reflect the past usage by both black and white Americans of that era.

Additional note: A portion of the main plot revolves a pivotal scene in which a few people are injured due to an explosion which destroys a building. This notice is to advise those who may suffer from post-traumatic stress disorder (“PTSD”) concerning traumatic events based the recollection of certain sounds or the imagery which may encompass them both.

What Inspired You to Write Your Book?
I wanted to give mystery/detective romance fiction another try after completing my debut mystery romance novel, The Speakeasy Murders. It also centers around an interracial relationship. So we step from the 1920s into another tumultuous era, the 1960s.

How Did You Come up With Your Characters?
I try to think of names first, beginning with the protagonist. The main character is like the center circle and from how she interacts with her environment and other characters, I get a glimpse of how I would like to develop her and the others' personalities.

Book Sample
The early evenings were filled with leftover dinners, political talk and a few children gathered around the television set awaiting the broadcast of the next popular program. Jazz music continued to be the genre of which young and old set their ears. However, a new wave of music struck a chord with the heart of America. Its sound was Motown. The soulful, slow rhythm and the lyrics sang so often about the yearning for their hearts' desire, it became a sensation and a source of pride for many Negroes. However, the melodic innovation would not be enough to instantly heal the rift which continued to widen between blacks and whites. The sound of Motown tempered the woes of several blacks still. Its unique rhythm even caught the reluctant ears of white Americans. Yet, television would have a difficult path to navigate as a means of telling all stories and would likely only gain the empathy of a few. As daughters and sons sat on the floor, watching the black and white images of those whom they would likely never meet in their lives, mother and father hoped to have on evening free from an interrupting news segment. Riots had erupted all across the United States. Despite the hopeful progress of civil disobedience and recent civil rights legislation, America was still a greatly divided nation. Yet this would not heal a country immersed in racial turmoil. Murder was the news. Whether it was the Ku Klux Klan or members of law enforcement against both white and black peaceful protestors or the expected crimes between two opposing individuals, death was had become an all too frequent normal event in the heart of the city of New York.
One small precinct housed specially trained detectives of colour. Very rare was a
higher education required even to become a rookie in the city. Even less likely was a female detective of a somewhat youthful age. Her name was Jacqueline Sadie Thompson. A graduate of Grambling University in the Creole south, she thought the irony palatable that she would find work in a city where not institutions traditionally created for coloureds by coloureds had been established.