You are here: Home / Fiction / Romance / Moondance by Kemberlee Shortland 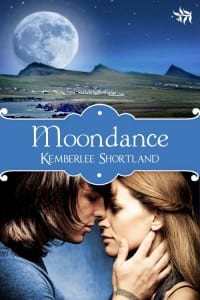 Blánaid thinks there’s something wrong with her. It’s been months since she’s dated, and even if she makes the first move to invite a man out, it seems he can’t run away from her fast enough. If it weren’t for her best friends, Ronan and Siobhan, Blánaid is sure she’d go crazy with loneliness and despair. Then, one night while watching the sunset, Ronan kisses her and suddenly, the world as Blánaid knows it is thrown into turmoil. She turns to Siobhan for advice and a shoulder to cry on.
Can Blánaid face the truth in Siobhan’s words?
The instant his lips touched Blánaid’s, Ronan was sure he’d found Heaven. Ever since meeting her, he tried to find a way to tell her how he felt about her. When he overheard her telling Siobhan she never dated the friends they hung out with, he kept his feelings to himself- until this night when everything seemed so right. And he thought she felt the same when she returned his kiss. But when she realized what was happening, she ran from him. Ronan was sure he’d scared her off forever.
Can Ronan settle for just being Blánaid’s friend?

What Advice Would You Give Aspiring Writers?
Write every day.

Author Bio:
Kemberlee is a native Northern Californian who was raised in a community known as Steinbeck Country, home to author John Steinbeck, as well as Jack London, Robert Louis Stevenson and others. With so much literary influence around her, it’s not hard to see why Kemberlee fell in love with the printed word.