You are here: Home / Fiction / Mystery/Suspense / Money Power and Poison by Reggi Allder 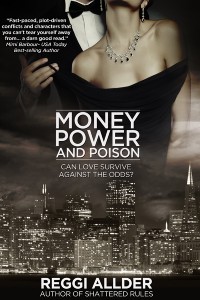 Money Power and Poison
Can Love Survive Against the Odds?
Be Careful What You Wish For

Business woman Kathryn Carlyle got her dream job catering a party for billionaire software developer Conner Harrison. Now she’s accused of his murder and in the cross hairs of a killer. Only TV journalist Holt Rand will listen. Is she confiding in a man who’s using her to further his career? Is she falling in love with him while he works against her? Will the killer let her live long enough to find out?

At home recovering from wounds he received during an overseas assignment, Holt needs a scoop to revive his stalled career. Kathryn’s story is the ticket. Even though a personal relationship would get in the way of doing his job, she’s tempting enough for him to consider it. But if she is a murderer he’d be crazy to fall in love with her.

Targeted Age Group:: 18 and up, for grown-ups

What Inspired You to Write Your Book?
Being in the Silicon Valley and seeing all the glistening buildings with well-known names on them, I wondered what if…
Then I talked to a man who had worked in catering for the rich and famous. He’d planned money-is-no-object parties and I got an idea for a suspense.

How Did You Come up With Your Characters?
This is tough question for a pantser. I don’t outline or plot the book ahead of time. I start with the hero and heroine and know their backstory. Then when I write, new characters come as wanted and needed to move the H&H through the book.

In the midnight gloom of a residential street in Carmel, California, business owner Kathryn Carlyle watched the city’s dim lights from the back seat of a speeding police car. She gasped for air as dread tightened her throat. This can’t be happening to me.
The catering van she drove to billionaire software developer Conner Harrison’s birthday party had been impounded by the police as evidence. She rubbed her throbbing temples to release the pain accumulated there.
Two blocks from her beachfront condo, she snatched a breath of air. “Please stop. I have to get out.”
The middle-aged officer guided the patrol car to the curb. “We’re not finished with you. Go, but don’t leave town.”
He’d probably been waiting all night to use that cliché. Don’t leave town. She almost laughed, except nothing funny had happened tonight.
She exited the car and inhaled the sea breeze as it rustled her hair. It was such a welcome change from the stifling atmosphere that contaminated the police station where she’d spent the last few hours. How long before the man came back to arrest her?
Relieved to be in her safe neighborhood, she took a deeper breath, kicked off her black leather pumps and sat on a driftwood log overlooking the serene bay.
She swallowed as nausea swirled in her stomach. The fact that she hadn’t eaten since breakfast didn’t help. Always nervous before an event, she’d planned to eat after Mr. Harrison’s party. Now he hovered near death. The thought of eating brought bile to the back of her throat. Why did the authorities think she’d poisoned a man she’d only met once?
A nightmare had snared her and was holding her in its grip. When Mr. Harrison died the charge against her would be murder in the first degree.
As the realization crept through her, she tensed. Two deep breaths calmed her, but didn’t stop the headache forming over her right eye. True she’d had the opportunity to poison him, but no motive. She only met him because he’d asked her to cater his birthday party. With his death there was nothing to gain and a lot to lose, her reputation, her business, her life.
In the morning the police would sort out the truth of her innocence. Still, adrenaline caused her heart to race. She rubbed her temples and tried not to think anymore.
A gust of wind circled her. She shivered and folded her arms in front of her. Damn. Her suit jacket was still in the patrol car. She stood brushed the sand from the back of her skirt, and picked up her high heels and shoulder bag. Time to go home, sleep was doubtful, but at least she’d put up her sore feet.
Leaves crunched somewhere in the shadows of the nearby trees, she squinted into the darkness but didn’t see anyone. Even so, fear gripped her.
She forced her swollen feet back into her pumps and walked quickly up the dimly lit street. The click of her heels echoed in the quiet night air. The desire to flee from an unknown danger increased the speed of her footsteps.
With the exception of a black truck parked at the curb, the street was empty. The pickup’s engine revved. The cab light came on and cast an eerie glow on the driver’s face. He smiled at her.
As she thought about waving to let him know the headlights were off, the vehicle drove straight at her. It jumped the curb, sideswiped her, and sent her flying.
With a thud she landed on the muddy front lawn of a neighboring condominium. The sound of the engine faded as the vehicle disappeared.
She lay motionless on the ground. Cold mud oozed into the fabric of her skirt. A twinge jabbed her and terror banged against her rib cage.
Overriding the sense of shock was her need to get home where she’d be safe. She grabbed the strap of her purse and attempted to stand. Pain shot through her hip and down her leg. She fell back into the mud.
A man dressed in black came out of the darkness and stood over her. Before she could cry out, he bent down and covered her mouth with his huge hand. “Don’t scream. You’ll wake the whole neighborhood.”