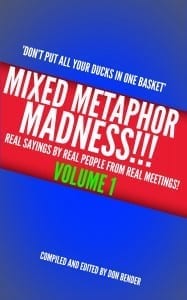 “Don’t put all your ducks in one basket” and “People that live in glass houses shouldn’t point fingers” are just a couple of the hilarious sayings contained in this series of books containing real sayings by real people from real meetings. They’ve been harvested from hundreds of meetings over the years. If you need a quick laugh or a pick-me-up, be sure to get all the books in the series. Don’t forget to get a copy for your friends, too! Laughter makes a great gift!

Don Bender has an intriguing background and experience, and he brings the breadth and depth from his varied careers and personal life learnings to his writing. One of Don’s best friends describes him as “the quintessential autodidactic polymath.”

After graduating high school from Vassar, Michigan in 1979, Don planned to attend Michigan State University in preparation for a career as an optometrist. While at Michigan State, he joined the MSU Spartan Marching Band percussion section, and played the tenor drums for three seasons before getting married to his high school sweetheart, Julie. Don’s plans to attend optometry school soon went by the wayside when he enrolled in an introductory geology class. In the spring of 1984 he graduated with a Bachelor of Science degree in Geology.

Later that year, Don began his career as a field geologist with an oil and gas exploration company located in Mount Pleasant, Michigan. The company used gravity surveying as their method to locate potential oil-containing geologic formations, primarily in the lower peninsula of Michigan near Onaway. The work was exclusively outdoors and strenuous, and Don spent sweltering summer days trudging through cedar swamps and freezing winter days walking over frozen lakes, all in the name of finding that black gold!

In October of 1985, Don and Julie became the parents of their first daughter. She was a preemie baby, and Don took a leave of absence from his exploration activities to be with his new family, staying in the Ronald McDonald House in Detroit, Michigan while his daughter got strong enough to go home. When the family was finally able to come home, the company Don had worked for decided they no longer needed his services.

After about six months of job searching, Don found employment as an extraction chemist with an environmental consulting firm in Southfield, Michigan. He worked second shift, and made a two-hour commute to and from Southfiled from where he was staying in Vassar–driving a beat-up old Chevette! Several years later Don was promoted to Standards Chemist, where he was first introduced to the fields of quality control and quality assurance.

In January 1988, Don left the chemist job to take a job with a small gray iron foundry in his home town of Vassar. Shortly after taking the job as a quality engineer, he achieved certification from the American Society for Quality Control. He was involved in coaching employee involvement teams as well, and won the company-wide Facilitator of the Year award. Don was eventually promoted to quality manager, and was responsible for the QA/QC department at the foundry. During his time at the foundry, Don graduated from GMI Engineering and Management Institute (now Kettering University) in Flint, Michigan with a Master of Science in Manufacturing Management. He and Julie also had two more children while he was employed at the foundry, one girl and one boy.

In May of 1994, Don left the foundry to take a similar position with a manufacturer of stainless steel exhaust manifolds. He left that job about six months later after realizing that the company was not as well off as his interviewers had let on.

Don immediately took a job with Delco in Saginaw, Michigan (at that time a division of General Motors), and was soon asked to begin working as a diagnostician. This position’s responsibility was to solve the toughest quality problems that the plant had, and he learned a specific set of problem solving tools and strategies developed by Dorian Shainin (see www.shainin.com for more information on Dorian and his techniques).

Since that time, Don has survived the bankruptcy of his current employer, Delphi Corporation, and has been certified by Shainin Consultants as a Red X Master Problem Solver, and was one of the first few people ever to be certified as a Green Y Master (Green Y is Shainin’s product and process development methodology). He coaches and leads problem solving teams around the world to rapidly find the root cause of a problem, and works to develop other Apprentices, Journeymen and Masters.

One of the threads that ties Don’s careers together is his nearly insatiable desire to learn new things. His favorite books run the gamut from hard sciences to philosophy to Steven King to the Holy Bible. Don has been a musician for over 40 years, playing drums in local pit orchestras and concert bands. Don is the “Voice of the Vassar Vulcan Marching Band” for pre-game and halftime shows, and periodically announces home football games for both the high school and youth football programs.

Don has also developed a love for the field of personal development, which began with his purchase of Tony Robbins’ “Unlimited Power” tape program many years ago. Don had the pleasure of meeting Tony Robbins at a seminar in Chicago, and was fortunate enough to have done a fire walk there as well. Over the years, he’s tried to instill Jim Rohn’s philosophy of, “work harder on yourself than on your job.” As a result, he’s read and listened to just about every great mind in the field of personal development.

Don also loves words and puns, and is an avid puzzler. He spends his free time reading and writing, playing music, thinking and puttering around with computers. Don’s oldest daughter is a graduate of Saginaw Valley State University, and his youngest daugher is a graduate of Central Michigan University and was just recently married. His son is currently attending Michigan State University, which is a great excuse for Don and Julie to attend MSU football games to watch a pretty darn good football team, but more importantly to revel in watching the best marching band in the Big Ten!