You are here: Home / Children and Young Adult Books / Mary of the Aether by Jeffrey Aaron Miller 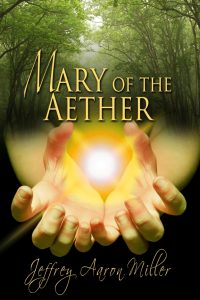 Fourteen-year-old Mary Lanham lives an unremarkable life in an unremarkable small town, until the day a man in a long, gray cloak creeps out of the forest, and a centuries-old mystery begins to unfold. What is the terrible secret Mary’s father is hiding, a secret that has put both of their lives in danger? What is the truth about Mary’s past that has awakened a great evil? And how can she win the heart of the boy she loves when the whole world is falling apart?

The first book of a four-book urban fantasy series!

What Inspired You to Write Your Book?
I grew up close to large cities: Los Angeles, Dallas, Tulsa. However, for a couple of years, I lived in a tiny town in Arkansas called West Fork. Living in a town of a thousand people is such a different experience. I wanted to use that experience as the backdrop for a magical tale, and that led to the creation of Chesset, the imaginary small town that serves as the setting for Mary of the Aether.

How Did You Come up With Your Characters?
I was planning for Mary of the Aether to be the first book in a series, and I wanted to create characters that would end up having surprising arcs. Conflicts shift and change as events unfold. To that end, I wanted the characters to start with strong, defined personalities that would create lots of tension.

Book Sample
The lunatic in the long, gray cloak dashed out of the forest and ran right up onto the front yard, waving his arms in front of him like a child playing tag. He skirted the porch, paused, turned a complete circle and fell onto his hands and knees. A hood obscured most of his face, but Mary could see the tip of a pointy chin covered in whiskers. She sat at the living room window, leaning against the sill and resting her forehead against the cold glass, transfixed by the sight. The crazy man crawled through the high, unmowed grass, his face close to the ground, shifting back and forth like a bloodhound chasing a scent. He stopped at the driveway, lifted his head and appeared to sniff at the air. Then he scooped up a handful of gravel and sifted it through his fingers.
It was the last day of winter, and a hint of snow fell in the valley of Chesset. From her house atop Neser Hill, Mary had a panoramic view of the city, gray and brown rooftops poking up from the blanket of trees, the winding asphalt artery called Main Street drawing a crooked line from east to west. Her breath fogged the window, and she had, until a moment ago, been writing a name in the condensation with the tip of her pinky. A-I-D-E, she made it as far as the fourth letter before she forgot all about the cutest boy in the world.
The crazy man lurched to his feet, swept his cloak off his shoulders and turned his back to the house. In the distance, Mary heard the old familiar rattle and hum of the school bus winding its way up Neser Hill Road. The crazy man had heard it, too, apparently, for he took a stumbling step back, spun on his heel and fled back into the forest, disappearing into the deep shadows beneath the boughs.