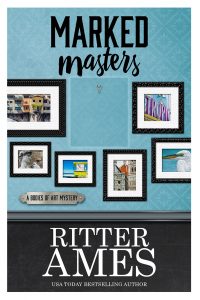 Laurel Beacham made working solo a personal success story and is known for her nerve, instincts, and ability to do whatever necessary to return each priceless masterpiece safely intact. As the world’s leading art recovery expert, she’s thwarted more heists than the average law enforcement professional. Museums applaud her skills. Thieves admire the cunning way she operates.

Her last job landed her the head position over the London branch of Beacham Foundation, but bringing one case to a close only opened a bigger one. More importantly, the new case inextricably ties her to Jack Hawkes, a man smart enough to be her equal but who keeps her trust meter firmly in the red zone. Trying to stop a rumored heist of the century, the pair leap headlong into a plot that gets more dangerous and illusive by the minute. The clock counts down as the bodies and forgeries stack up.

What Inspired You to Write Your Book?
I love escapist mysteries, and I love hearing the stories about recovered masterpieces, and all the things the crooks and cops go through between when a piece of art is stolen and ultimately recovered. But I wanted to do it with characters not actually part of the true law enforcement world. I didn’t want them tied to warrants and rules or have police or FBI backup, as I wanted them to have to succeed by their wits and their ability to sometimes talk their way out of situations. I actually had the idea for my characters long before I started writing the first book–I only played around with chapters and worked on the extensive story arc outline in the beginning. My point-of-view character, in particular, came together only when I wrote a flash fiction story as a contest entry and used her as the character because I already had her solidly in my mind. But instead of just recovering stolen works, I had her steal a work that had been previously stolen. That’s when I realized I needed to let her expand her ethics to encompass all the skills she truly needed to do her job. The male protagonist came as a mystery man, and kind of stays that way the first couple of books. It helps frustrate my female lead who–due to all the life experiences she’s had–feels she must control way too much in her life. The male character helps even this flaw out for her in ways that keeps her aggravated and intrigued at the same time. Plus he’s charming and smart and funny, and tends to get them into things she can’t do herself–making her much more irritated because he succeeds or has a better idea. They have their personal and professional missions, and I get to have all the fun of learning what happens first–and what is said between them in those exciting moments. Also, I’ve provided her a support team with their own attitudes, so that makes everything move that much faster.

How Did You Come up With Your Characters?
I loved the idea of a smart female and male character trying to best each other as they worked to achieve the same goal–all while trying to do the really good thing all the time of keeping art from thieves. I love traveling, and eating food from other countries, and this series allowed me to tie my love of all things European to the mystery as well. Finally, I get to write sharp and snarky dialogue for characters who know their jobs, know how far they can push each other, and always go the distance to reach their goals, working through any disappointments or roadblocks along the way and doing so in often extremely creative ways.