You are here: Home / Autobiographies, Biographies & Memoirs / Marked for Life by Joie Davidow 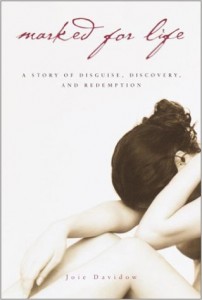 What inspired you to write your memoir?
I was born with a purple birthmark covering almost half my face. Over time, I came to realize that although I thought I was a freak and suffered from it, most people harbor the fear that they are somehow less than normal and that they are hiding a secret. I used the birthmark as a metaphor to show that we can overcome these things that stop us from fully realizing our life potential.

How did you decide how to publish your book and where is it published through:
I was lucky enough to be picked up by one of the top New York agents. She placed the book with Crown Publishing. It is currently out of print but available as a paperback or ebook.

How do you see writing a Memoir as different from writing other genres of books?
Memoir writing requires a painful honesty, stripping off all the hard-won armor you’ve used to protect yourself and revealing your inner self as nakedly as you can. It requires a belief that you have something to share with others that is worthwhile, hopefully inspiring.

She is currently the editor of InRomeNow.com, an online magazine she founded in 2005 with Vikki Ericks. The site, which is updated weekly, gives readers more than 100 pages of information on her adopted city, Rome, Italy.
She was the founder of L.A. Style, the ground-breaking publication that chronicled the Los Angeles lifestyle, becoming the fastest growing regional magazine in the United States and winning numerous awards. She served as the magazine’s Executive Publisher and Editor-in-Chief . She was a co-founder of the L.A. Weekly, a newspaper which has been an integral part of life in Los Angeles.