You are here: Home / Bargains and Freebies / Bargain Books Under $3 / Magic of Impromptu Speaking: Create a Speech That Will Be Remembered for Years in Under 30 Seconds by Andrii Sedniev @andriisedniev

Magic of Impromptu Speaking is a comprehensive, step-by-step system for creating highly effective speeches in under 30 seconds. It is based on research of the most powerful techniques used by winners of impromptu speaking contests, politicians, actors and successful presenters. The book is entertaining to read, has plenty of examples and covers the most effective tools not only from the world of impromptu speaking but also from acting, stand-up comedy, applied psychology and creative thinking.

Once you master the system, you will grow immensely as an impromptu public speaker, become a better storyteller in a circle of friends and be more creative in everyday life. Your audience members will think that what you do on stage after such short preparation is pure magic and will recall some of your speeches many years later. 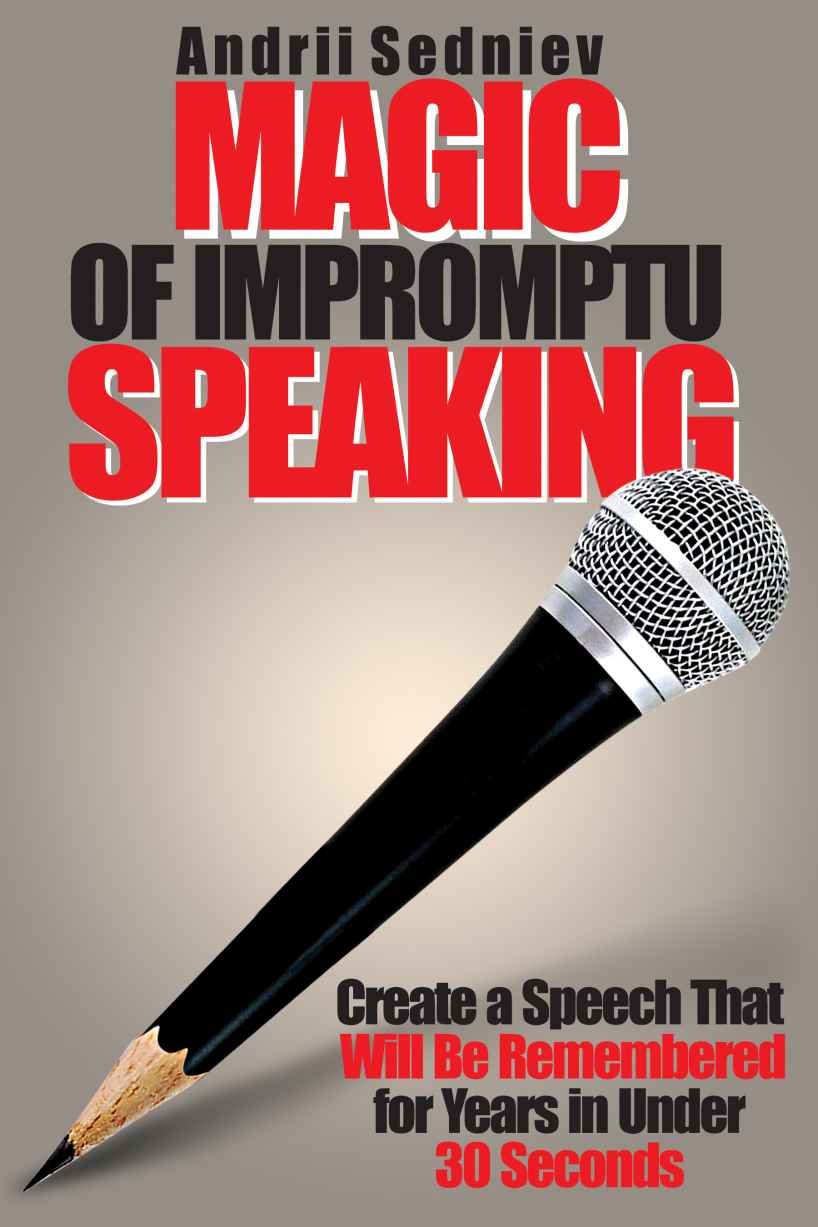 About the Author:
Andrii Sedniev, MBA, is the founder and trainer of the Magic of Public Speaking system which has helped hundreds of speakers worldwide to unleash their potential in public speaking in a very short period of time. Andrii’s students say that the Magic of Public Speaking system is the most complete and powerful public speaking training that they have ever experienced. At the age of 19, Andrii obtained his CCIE (Certified Cisco Internetwork Expert) certification, the most respected certification in the IT world and became the youngest person in Europe to hold it. At the age of 23, he joined an MBA program at one of the top 10 MBA schools in the USA. Being the youngest student on the program and at the age of 25 he joined Cisco Systems’ Head Office as a Product Manager responsible for managing a router which brought in $1 billion in revenue every year. These experiences have taught Andrii that success in any endeavor doesn’t as much depend on the amount of experience but rather on the processes that you are using. Having dedicated over 10 years to researching and practicing a variety of different techniques, Andrii has created the Magic of Public Speaking system. This system is a comprehensive step-by-step program that will enable you to achieve in 2 months what most speakers never achieve in 10 years.

Website(s)
Author Home Page Link
Link To Buy Magic of Impromptu Speaking: Create a Speech That Will Be Remembered for Years in Under 30 Seconds