You are here: Home / Fiction / Drama / Lovers, Players & The Seducer by J. A. JACKSON 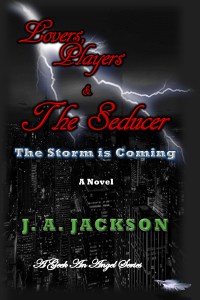 (5 stars) Nicole Hastings; Indie Book Reviewers, Goodreads, Shelfari, Librarything…
Nicholas La Cour loves money. In the game of betrayer and betrayed he thinks his sister Lacey is the prefect target for his manipulative schemes to keep his financial ruin a secret.
Gorgeous Lacey La Cour lost her hopeful and playful spirit after being dumped by her childhood sweetheart. Now an adult, she is strong and independent.
Determined to find the answer to his money problems, Nicholas discovers his best friend Kienan Egan is strangely attracted to his sister Lacey.
Does his sister’s love life hold the answers to all of his problems?
Will Lacey discover her brother’s deception before it’s too late?

What Inspired You to Write Your Book?
Many things inspire me. For example for my book the Grand Hotel my inspiration came from walking past the regal old Sir Drake Hotel on Powell Street in San Francisco one night. The flickering lights coming from welcoming door gave. Lovers, Players & The Seducer takes the young characters found in The Grand Hotel and brings their adult lives to focus.

How Did You Come up With Your Characters?
I’m a romantic at heart I drew observing many experiences dating in the Bay Area to come up a series with lively plot ideas with a surreal twist which captures the fabulous crowd of loveable geeks as they encounter jealously, betrayal, outrageous behavior, heartbreak, and romance.

Just after midnight Nicholas La Cour drove his car up Skyline Boulevard. The lights of the City of Oakland loomed out before him. The chill of the night had a strong bite he thought, as he quickly closed his sunroof.
A few minutes later the bright lights of the house loomed before him. Only a select few men were ever invited to the parties held here. His best friend Quinn Rolandis was one of them.
Nicholas found a place to park his car. A few minutes later he headed for the front door and felt the familiar churning feeling in the pit of his stomach just before he rang the bell. The front door opened for him.
“Jesus Christ girl, you don’t have any clothes on!” he said, his eyes bulging. His mind wandered back to the time Quinn had taken him to a bachelor’s party. He wondered if tonight was going to be one of those parties. He didn’t have long to wait to find out.
“Lips, hips, or fingertips?” the young girl asked smiling up at him.
“How old are you?”
“None of your damn business,” Quinn’s slurred voice coldly sliced the air. It was obvious Quinn was inebriated.
Nicholas looked back at Quinn. He was surrounded by women. He knew he wasn’t ready to leave.
“Look Nicholas, get your butt in here. The party has started. Now that girl that answered the door gives a mean blow job.” Quinn sluggishly chuckled. “Let her get you started.”
Nicholas hesitated. He hated it when Quinn had been drinking too much. “Quinn, I thought I was just coming to pick you up. You said you were ready to go,” he murmured under his breath. He was torn between looking at the naked woman beside him and looking back at Quinn. He shoved his hands in his pockets.
Quinn’s laughter carried on the air.
Nicholas heaved out a sigh. “It’s the middle of the work week, for crying out loud, Quinn! And I have an early appointment, remember? And it’s past midnight as it is.”
Nicholas was in agony. He wished the naked girl standing in front of him would stop smiling at him. He swallowed hard and lowered his eyes.
The young girl bushed her naked body against him.
Quinn laughed. His eyes were red and bloodshot. “Nicholas my man, I can’t believe you sometimes. Right now you’ve got a beautiful naked woman standing in front you ready to fulfill your every desire and you are standing here thinking about work.”
With one hand Quinn took a big swallow from a bottle of bourbon. With his other hand he swatted the backside of a naked girl. “Nicholas man, you don’t have your priorities in order! Tonight I’m a bad boy. Tomorrow……Well we will just have to wait and see how good a boy I can be tomorrow. And then Friday will take care of itself.”
The naked girl giggled loudly as she rubbed against Nicholas. She groped her own breasts as she giggled.
Quinn spoke without giving Nicholas his full attention. “Look here Nicholas. Right now, Luscious Lola is waiting for me. And you know I can’t resist Luscious Lola,” he said with an effort to steady himself. “See what you can do with that naked girl in front of you. Go and have some fun,” he said before heading back up the staircase.
The naked girl standing in front of Nicholas reached out and took his hand. He followed her like a child. She led him down a long corridor. Finally they reached a door. She reached out and opened the door wide. Standing on the threshold she held her arm out wide beckoning Nicholas to enter.
Nicholas stood there taking in the room. A Jacuzzi tub sat in the middle of the room. Its soft hum purred like a kitten.
Nicholas slowly smiled.
The young woman closed the door.
Slowly the young woman ran her hand over Nicholas shoulders and removed his jacket. She dropped it to the floor. She ran her hands down his spine and under his polo shirt. In one swoop she pulled it over his head. In seconds she’d striped Nicholas naked.
Her hands reached out and slowly caressed his bare chest.
Nicholas smiled nervously. “It’s chilly in here.”
“Come, let’s get in the Jacuzzi,” the young girl said. “Then you’ll relax and I’ll fulfill your every pleasure!”
Nicholas hesitated. “Hey look. I… I hope you don’t think this is strange but is there an older girl around maybe? Say one that’s at least eighteen” He hesitated. “And maybe one that hasn’t screwed Quinn tonight?”
The young girl smiled. “Luscious is here tonight,” she said. “Quinn prefers Luscious. By the way I’m twenty-one. I have a driver’s license to prove it. I just look young. And no I haven’t screwed Quinn tonight. Blow job yes, screw no,” the girl added.
Nicholas smiled. “Okay then let me start over. My name is Nicholas…. And I’ll have what Quinn didn’t have. In fact give me the works, but before you ride Mr. Nicky wrap him up a condom.”

About the Author:
J.A. Jackson is the pseudonym for an author, who loves to write deliciously sultry adult romantic, suspenseful, entertaining novels with a unique twist.

Links to Purchase eBooks
Link To Buy Lovers, Players & The Seducer On Amazon