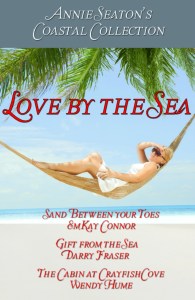 Three wonderful romances to warm your heart and send a delicious shiver down your back. A millionaire who inherits a Great Dane in Key West; a mermaid on a fictional island; and a cray fisherman on the rugged west coast of Tasmania, will all entertain you on their journeys to their happy ever after. Will they each find it… or will the odds be too hard to overcome?

What Inspired You to Write Your Book?
This book is a collaboration between one American and three Australian romance authors. Each author was invited to write a romance based featuring a beach or coastal setting. This collection includes three very diverse stories, including contemporary romance and fantasy.

How Did You Come up With Your Characters?
Each author crafted their characters to fit the story beach or coastal setting theme.

Book Sample
Excerpt from SAND BETWEEN YOUR TOES

There was no hurry to fetch his breakfast so Toby continued to enjoy his coffee and watch the day unfold. He padded down to the narrow beach edging the island and curled his toes into the sand. The top layer had yet to warm up and the sand underneath was even colder, but Toby savored how the tiny grains shifted under his feet. When he left New York, he donated his entire Wall Street wardrobe to a homeless shelter, vowing to never again wear ties or wingtips. His closet now held T-shirts, board shorts, flip-flops and running shoes with a couple of Hawaiian shirts and chinos suitable for the occasional outing to an upscale restaurant. He found most establishments were willing to forego dress code requirements if diners spent enough money, and he had plenty to spread around.

The ocean was calm and stretched to the horizon past the low land masses. The sky was clear and brightening quickly. Toby never tired of scanning the view or watching for flashes of activity from Key West. Idly he watched a small dot morph into a fishing boat as it headed out to sea. The vessel continued moving in his direction—not an unusual occurrence—but not until the engines reversed did Toby realize it was headed straight for his dock.

“Only one way to find out.”

Striding down the beach, empty coffee mug dangling from a hooked finger, he reached the wooden structure in time to see a young woman waving to the Bessie Marie as it headed away. Shock rooted him to the ground when he realized what was happening.

“Hey. Hey, lady! Get that damn tub back here or you’re going to be swimming back the way you came. This is private property.”

At the sound of his voice, the woman whirled around. She clutched a down-filled puffer coat in her arms and had a computer case slung over one shoulder. Random hunks of blondish hair had escaped a messy topknot and hung loose around a face marred by exhaustion. She wore a tailored suit that did nothing for her figure and black heels that did great things for her legs. He noticed she was missing a gold hoop earring in one ear and her black-framed glasses sat crooked.

Toby couldn’t help it. He burst out laughing. “What the hell happened to you?”

“A missed connecting flight thanks to a blizzard out of Chicago and eight hours fighting for floor space at the Hartsfield-Jackson Atlanta International Airport followed by a flight into Key West on a puddle jumper that looked ready to fall out of the sky is what happened to me,” she snarled.

Toby held up his palms as if to keep her away. “Whoa. Rough morning.”

“Rough morning, rough night, rough…everything.” Now she sounded on the verge of tears.

He lowered his hands and tried to keep the amusement out of his voice. Clearly his uninvited guest was in need of a little sympathy. “I’m not clear where a sunrise fishing charter fits into things.”

She had the grace to blush at his insinuation but threw back her shoulders. “I apologize for showing up unannounced, but I need to speak with Mr. Hayes about an urgent personal matter. Are you his…handyman?” The woman looked back and forth between Toby and the speedboat tied to the dock, as well as the sailboat anchored offshore. “Boat captain? Whoever you are, can you tell Mr. Hayes I’m here?”

This was getting better and better. Whoever this blonde was who had travelled all the way from Chicago to see Toby Hayes didn’t even know what he looked like. He had to admit she probably wasn’t expecting him to be wearing neon-orange board shorts and a T-shirt for a popular Key West nightclub.

“Whom shall I say is calling?” Toby asked in his best imitation of a stiff British butler.

The blonde frowned at him. “My name is Katelyn Whitaker. I’m an attorney with—”

“Mack. Ambrose. And Rogers.” Toby clenched his jaw. He should have known. His lawyer had emailed him just last week that the Chicago firm was hounding him for a meeting.

“Mr. Hayes discusses his legal affairs with you?” She straightened her glasses and gave him a thorough up-and-down.
Toby didn’t like the way she was looking at him, afraid that if she looked too close she might recognize him.

“It’s not like he has a lot of choices. There’s just me and the housekeeper” He gave a negligent shrug. “He said something about it when we were out fishing. It’s about that nudist-only cruise line he wants to invest in, right?”

Her eyes widened. “Um, I’m not at liberty to share the particulars. If I could just speak with Mr. Hayes—?” She waited for Toby to introduce himself.

“Kit.” Toby figured she could use Dinah’s nickname for him. No need to spoil the fun. At least not yet.

Eyeing Katelyn’s weary face and slumped shoulders, he made an executive decision. Since she’d traveled all this way, she might as well enjoy a bit of tropical goodness. Once she’d soaked up a little sunshine and gotten a little sand in her bikini bottoms, he’d send her back where she came from.

“Mr. Hayes isn’t here right now, but you’re welcome to wait for him if you want.” Toby made a point of looking over her shoulder. “Your ride is gone, anyhow.”

“Not here? When will he be back? I don’t have all the time in the world,” she huffed.

“Look, lady. You’re essentially trespassing.” Toby was losing his patience. “I could have you arrested. Instead, I extend Mr. Hayes’s hospitality and you pitch a fit about the inconvenience.”

Katelyn seemed to realize the mistake she was about to make, and she offered him a weak smile. “Your offer is very kind. I would be happy to stick around until Mr. Hayes returns. Do you have any idea how long that might be?”

“He didn’t say.” Toby turned and headed toward the house, trusting the lady lawyer would follow. “After all, I’m just the handyman.”

About the Author:
EmKay Connor is an award-winning romance author and freelance writer. She is a member of Romance Writers of America and numerous RWA chapters, including RWA-San Diego, Outreach International RWA, Yellow Rose RWA and RWA Kiss of Death. Her manuscripts have finaled and won in numerous contests, including Spring Into Romance, The Unpublished Beacon and RWA’s prestigious Golden Heart.

Wendy Hume / Wendy L Curtis finds the Tasmanian mountainous landscapes and picturesque beaches to be perfect for dreaming up her multi-layered story lines and characters. Yes, Erotic Romance is alive and well and living in Tasmania. Her debut release with Harlequin Escape Publishing is, however, based in and around the tropical settings of Papua New Guinea (PNG) and Cairns in Far North Queensland (FNQ). Not only does Wendy bring the unique flavour of Australia to readers but also awareness of the big issues present in the world. People smuggling is a major player in Above and Beyond. Homelessness and disabilities are in books she is now writing. Add some danger, death and passion and you’re in for a wild ride. Get ready.

Darry Fraser lives and works in South Australia on an island not unlike the fictional but very beautiful Australis Island which is featured in most of her stories.