You are here: Home / Fiction / Lolita in the Lion’s Den by Justin Forest 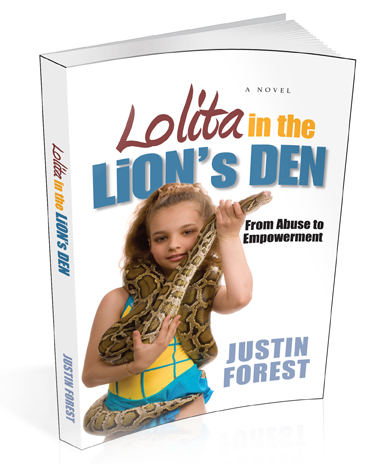 A young man must overcome a horrific past in order to release his inner demons in Justin Forest’s shocking new novel, Lolita in the Lion’s Den or Pre-Tween Juxtaposition.

Glen has fought for years to escape a brutal home life, one in which he acts as his mother’s only friend and to accept that his father has been molesting his sister for over a decade.

But after dropping out of high school and spending years working aimless jobs, Glen finally turns a new chapter when he enters the thrill of college life.

But with that freedom comes disturbing sexual desires and inclinations. Having become increasingly reliant on his own fantasy world, Glen soon finds himself mired in the world of adult pornography and struggling with his attraction to both women and girls.

Haunted by the damage his father’s actions wrought on his family and other victims, Glen must come to terms with his admiration for the exact thing his father so actively destroyed.

More relevant than ever in today’s hypersexualized world, Lolita in the Lion’s Den or Pre-Tween Juxtaposition is an emotionally provocative read that gets to the heart of some of society’s most pressing issues.

Targeted Age Group:: adults 21 and over

What Inspired You to Write Your Book?
True life events compelled me to write Lolita in the Lion’s Den. I always felt that we tolerate people truly being people only to a certain degree. We say we want truth, but how much do we want this? When I read Nabokov’s Lolita and when I read many other books on the subject, it seemed we always got the most horrid kind of main character: a psychopath or a character with anti-social characteristics that offends against a child with no or little regard. I thought about a real-life scenario, where men I knew did not offend but were really struggling with their sexual identities while being well aware and unwilling to actually offend. Yet the society saw them as rapist-murderers. I thought to ask this question in a form of a novel: what if you, dear reader, woke up and found you were attracted to someone under the age of eighteen? This is not an easy subject, but compelling things never are.

Yet this is not all. It also became clear to me that we are overprotecting children. As someone who was part and among continuous abuse, and as one who studies the sex-trafficking trade–and as one who worked in child care for over a decade–I became well aware that we do not take sexuality seriously in our society. When I noted on my past Facebook page that the trend in pornography today is women in pigtails shot on school buses and terms such as barely legal, I got the following response: “I am happy to know that you are up to date with the latest trends in porn. You make us proud.” Though I found myself laughing too, it shows that we do not distinguish between unhealthy sexuality (largely pornography) and healthy sex (positive relationships). We do not take sex seriously. For all of us, we never get a good education about our sexual selves. Kids are in the dark, and that makes them victims. I realized that almost all the research on sex crime points to victims and almost none to the offenders. Yet sex-trafficking offenders are guys like me: middle aged, married white guys with kids living on the safe street. I realized kids, especially girls, need a kind of sexual education revolution in the US, and that can only come from a better understanding of sexuality and all of it’s faces, not just the face we are comfortable with.

How Did You Come up With Your Characters?
Glen really is the best character to look at an unaccepted sexual identity or set of identities and the danger girls face. The Lolita in the book is not a girl per say. Glen puts himself in place of Lolita at times, and Lolita is also used as a word to describe how society sees any girl that is interested in her sexuality. I do not mean her interest in older men. That’s the old school definition of Lolita–a sexually promiscuous girl who likes much older men. No that is what society wants. My definition is a young girl much older men take advantage of and Glen would know this. As he struggles with his attraction for girls, he also understands what makes girls most at risk. He wants to protect them, not harm them. After all, who knows a computer better than a hacker?