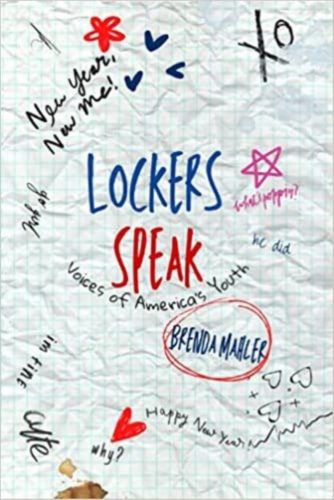 Lockers Speak occurs as the students exit the school to begin summer break. They leave behind the lockers who personify their thoughts and emotions. As an administrator walks the empty halls, she reflects on the events of the school year. The voices whispering, sometimes screaming from the lockers share stories of friendship, academic struggles, death, abuse, celebrations, and basic human experiences.

This book is a compilation of students’ thoughts. The words presented through verse stand-alone but together intertwine to create a glimpse of society. Youth bring to school more than their backpacks. They hold a unique perspective because with them they carry memories, aspirations, and dreams as well as every emotion, event, and person who influenced their identities, complicated by issues that may not be new to their generation but are enhanced by the 24/7 broadcasting of news and social media.

Public schools present a microcosm of society. The voices on these pages provide snapshots of teens growing up in modern society. Collectively, they share the story of our culture. Sometimes the speakers blatantly state facts without realizing the secrets they reveal; others share little directly. With each student, a story evolves like a puzzle, and with each voice the pieces assemble to provide a glimpse into their realities.

Locker’s Speak provides adults: parents, educators, counselors, anyone invested in America’s youth a glimpse into their minds. The words also provide a means for teens to hear from others that they are not alone as it shares the everyday, common experiences that provide life joy while challenging survival. Through students’ voices, it reveals the commonalities of life’s experiences.

What Inspired You to Write Your Book?
Lockers Speak emerged from students' writings shared during the author’s thirty-four-year career in public education. Though the individuals are fictional, the events and emotions reflect real life experiences. With the desire to use writing as a tool for students to understand themselves and their world, the author prompted students in her classrooms to write about personal adversity. The students became excited to tell their stories, knowing someone was going to listen. Their essays became the catalyst for this text.

How Did You Come up With Your Characters?
The characters' names are fictional. Though observation and personal interactions with hundreds of students' contributed to the development of the characters, no characters are based on one individual but instead are a combination of personalities and events of multiple people.

Book Sample
Prologue
As she walks by locker 623, she notices the door is hanging open. With the palm of her hand, she reaches out to push it shut and continues walking. Metal hits metal causing the door to swing back open without the familiar click that acknowledges it has latched. Upon closer inspection and a slight jiggle, a folded slip of paper falls to the floor, a simple system that allows for easy access without a combination. To the untrained eye, it is just a piece of paper; to high school students, it’s a shortcut, a quick and easy access; to her eye, an administrator, it’s an invitation to theft, vandalism, and bullying.
This locker needs some TLC by a custodian before a new tenant arrives in August. A mirror adheres to the interior, somewhat askew, probably from the constant slamming and jarring. The bottom shelf houses a battalion of ants extracting nourishment from the unidentifiable substance coating the surface. She writes a note to the janitor on the notepad in her hand, records the locker number and scribbles her name, Mrs. Smith.
Though no backpacks, purses, or personal items exist, evidence of the experiences that occurred here during the school year remain. A name carved into the metal on the right-side wall surrounded by a heart provides only clues to the identity of a crush turned true love then faded as quickly as the weather changes. Only the three letters, m-a-n, remain distinguishable because a heartbroken teen scratched out the other letters leaving only the original grey metal.
Names run through her mind of possibilities, maybe Luis Guzman. Rumors spread that girls craved his company, and his name was synonymous with the word player. His sister Ava might be the lost love. Those two both seemed to attract the interest of drooling peers. Maybe the Tilman boy, Morgan, but he never seemed too interested in girls or did they show much interest in him. Surely not Jack Pitman, the ultimate loner. The only emotion he ever showed consisted of contempt towards adults. Mrs. Smith shakes her head assaulted by the students’ names and attitudes that flash through her mind.
Besides their lunches and books students carry their experiences, concerns, past, present, and future. Everything, good and bad, bits and pieces of life crammed into these lockers. Some students expose their life like pictures pasted on the locker walls while others buried any evidence of their identity under piles of papers, inside notebooks, folded, stapled, and abandoned beneath leftovers from long ago lunches and locked behind metal doors.
Not daring a closer inspection, she moves on thinking about the stories these cubicles might reveal, and the glimpse into teenage minds they would expose if they could speak.
It’s the end of yet another school year. The empty, ravished halls reflect the lives of the teens beginning summer break. They have raced out thinking of pool parties, skateboard parks, and love interests. Their thoughts, like the teachers and hers, race from what they could do, to what they might do, but never settle on what they will do during the two months of free time.
This is a day of celebration because nobody is assigning homework or asking questions with vague answers. For the students and adults, the unknown sparks excitement like lightning hitting a power line. Excitement for the possibilities and the knowledge that the “must do” list is now shorter than yesterday. But under the immediate excitement lives anxiety because for many mixed with the fun plans is isolation, emptiness, and the unknown, and for some will emerge bad choices, unexpected consequences, and irrevocable decisions.
Her foot kicks a folded 2-inch triangle. The once smooth paper looks worn as it lays creased and folded with the flaps tucked under to secure the message inside. Out of curiosity she unwraps the note, reads the contents to discover a love letter. Through a series of loopy letters, acronyms, and icons, a message reveals a covert meeting planned for later at the water tower. Teardrops mark the edges of the page, each letter i is dotted with a heart, and XOXOXOs run along the bottom of the page. Instead of returning it to the trash piles on the floor that have accumulated during the locker clean-out, she lets it drift into an already full trashcan wondering what other information lies among the torn papers, discarded notebooks, and broken pencils.
Leaning to the left, she avoids an open locker door. The recently vacated cubicles trigger memories, anecdotes students were screaming to share but were protecting from discovery. As a principal, she witnesses students from a rare vantage point, youth growing up in modern society, a culture different from their parents’, striving to define their world yet becoming human mirrors reflecting a changing world.
Their lives reveal problems exclusive to their generation, issues enhanced by the 24/7 news cycle and social media. Their thoughts impart wisdom; what they don’t say tells a different story. Like puzzle pieces, when all the stories unite, a picture begins to emerge. Whether the stories are accurate or flawed becomes unimportant because they are believed, rumored, embellished and are now gospel.
Seldom does a person share the whole story because everyone is influenced by their singular perspective. However, the lockers before her whispering stories reflect the faces of the inhabitants whose eyes communicate. Their past limited, the future unclear, their stories flourish – alive and developing. If the lockers could speak, they would expose thoughts of the students who make decisions for the future.
Over the summer, many new chapters will be written. Mrs. Smith will have a lot to catch up on. For now, she continues to stroll down the hall, stopping occasionally to talk to a teacher, pick up a discarded book needing to be shelved, or make a note of a needed repair. All the while, whispering voices scream from the lockers.