You are here: Home / Bargains and Freebies / Bargain Books Under $3 / Live Laugh Lockdown by Ronit Mitra 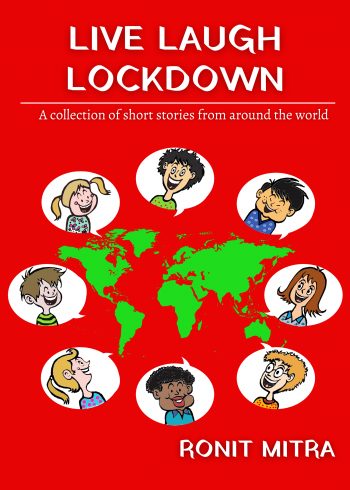 This collection of stories started as one short story inspired by a social media post on human kindness but over time it has grown into a collection of 12 stories where Ronit captures the life experiences of children across the globe during this lockdown, through his imagination. These are stories about kids who have taken the adversities of the global pandemic in their stride and gone on to create something positive even in these difficult times.

What Inspired You to Write Your Book?
Creating this book has been a positive experience for me and I have also captured that journey as a part of this book in the epilogue, my twelfth and last story of this collection.

How Did You Come up With Your Characters?
All the characters are from my imagination, but inspired by friends and family, and news articles or story books I read.

Mahi lived with his parents in a high-rise complex, The World Residency, in Worli, Mumbai. Their apartment, B 1902, had a beautiful view of the Arabian Sea.

Mahi was 8 years old, and he was one of the skinniest boys you would have ever seen. He was not the strongest boy in his class, but he made up for that with speed and agility. Mahi was good at science and excelled in maths, but he was never interested in history. He was excited about his classes starting in April, but then around mid-March the coronavirus had hit India and he was locked in the house, not allowed to go out at all.

Mahi’s birthday on 31st March had been ruined and he had not breathed fresh air for three weeks now. That day, he had finished his online programming class and was reading a book sitting by his bedroom window. He was so absorbed in the book that he did not notice the parrot that had precariously perched itself on the window-sill next to him. Finally, when the bird made a screeching sound with all its might Mahi looked up from his book. Or, to be more exact, dropped his book to the floor in surprise. His mother heard him and shouted, “Sab theek hai? Is everything okay?” Mahi shouted “Yes” in reply. He turned back to the bird sitting on his window-sill. “Who are you?” he asked. “Screech,” replied the parrot. By now Mahi had divined that the parrot could not speak like some trained parrots. Even so, Mahi kept asking questions and got answers in screeches and caws. After a few minutes, Mahi started to feel hungry and thought that if he was feeling hungry the parrot might be hungry too. So, he reached into his desk drawer and drew out his secret cookie tin, which he opened to reveal a large collection of chocolates and biscuits. He took out a Good Day, placed it in front of the parrot and said, “Here is a good day for you”. Then, he pulled out an Oreo for himself (he did not give the parrot an Oreo because he was not sure if parrots are allergic to chocolate. Though who does not like Oreos, he thought) and began to munch on his biscuit. The parrot ate his biscuit so fast that Mahi was worried the parrot would choke and there was no way he would be able to perform a Heimlich on a parrot. Thankfully, the parrot finished his biscuit without choking and screeched in a grateful tone. He then flapped off, looking stronger.

The next day, Mahi sat at the same window, thinking about the parrot he had met the previous day. Suddenly, he heard the flap of wings. Faint at first and then it grew louder as the parrot came and settled down on the sill with an expectant look on his face. Mahi was thrilled and took out another Good Day biscuit. The pair sat and enjoyed their biscuits in silence.

The parrot had been visiting Mahi every day and they had been eating biscuits together. Today, as the parrot approached Mahi, it said two clear words. “Good Day”. Mahi gasped and dropped his biscuit, but caught it just centimetres from the floor (told you he was agile). Mahi then started to teach the parrot words.
After a few weeks, Mahi realized that talking to the parrot (who could now speak sentences) was freeing for him. He did not have to wear a mask or sanitize his hands or anything of the sort when he met the bird. He was free from his boredom.