You are here: Home / Fiction / Science Fiction / List of the Dead by R. Curtis Venture 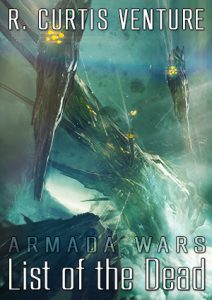 What began as a border struggle has now erupted into open conflict. Humanity and the Viskr are at each other’s throats, and for the first time in a generation war is a credible threat to the many worlds of mankind.

Operative Elm Caden already suspects the Viskr did not attack humanity first, and he is determined to root out the fugitives he believes orchestrated the hostilities. But they have fled into the barely charted Deep Shadows, and after the battle at Woe Tantalum it is clear they are allied with a previously unknown power… a power as hostile as it is mysterious.

While the Imperial Navy engages the Viskr fleets, Caden and his companions — stoic soldier Rendir Throam, and redoubtable pilot Euryce Eilentes — have received new orders from up on high: find and kill Maber Castigon, before he can assassinate any more Imperial Shards.

But with the Viskr making increasingly desperate strikes in Imperial territory, such things are easier said than done. And through the gathering chaos along the border come the rumours. Whole colonies are falling silent, great ships prowl in the darkness between the stars, and the wind whispers a warning across the many worlds:

‘List of the Dead’ follows on directly from ‘Steal from the Devil’, and is followed by ‘The Ravening Deep’. Both are also available in paperback and on the Kindle platform, and now for the first time in a 3-book value omnibus edition for Kindle.

What Inspired You to Write Your Book?
This book was the inevitable sequel to ‘Steal from the Devil’. When I set out to create that first book, I had already sketched out a five-novel story. Incidentally, the sequence of books now also involves four novellas which act as “side episodes” expanding novels three and four.

Although they are both part of a series, ‘List of the Dead’ is very much like the second half of ‘Steal from the Devil’. It was a true pleasure to write it.

How Did You Come up With Your Characters?
The majority of the characters already existed in the first book, however in ‘List of the Dead’ some stepped forwards and were given more attention. Some new, minor characters did appear: the crew of a small hauler ship. These guys were fun to come up with, and you can tell almost straight away that their greatest responsibility is to keep each other sane. The ‘big bad’ was also given a face… well, some faces. You’ll see what I mean.