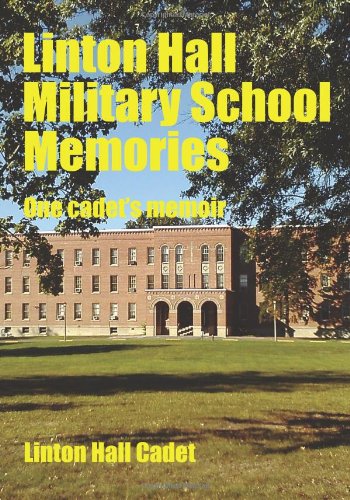 Linton Hall Military School, located in Bristow, Virginia, was an unusual concept — a military boarding school administered by Benedictine Sisters, for boys from six to sixteen years old, from when it was founded in 1922 until 1989. In this thorough, detailed account, the memories come flooding back: the obsessive rules covering every detail of daily life, from how to fold your underwear to the strange rules and procedures for using the toilet; the nuns’ cruel punishments, which included making little boys who had accidentally wet the bed wear their urine-soaked pajamas around their neck all day; the lack of privacy, with nuns watching every time that the boys took a shower, and the censorship of outgoing letters so as to conceal the school’s negative aspects from parents; as well as the fun of going camping, shooting live ammunition at targets, and trading buttons from school uniforms for kisses from girls — other boys’ sisters who visited the school. A thrilling roller-coaster ride of bittersweet memories and emotions for alumni, and a surprising look at the past for current students and parents. Includes many photos and excerpts from old brochures from the 1940s.

What Inspired You to Write Your Book?
After almost half a century, it was time to reveal what had been concealed by censorship of outgoing mail. Furthermore, the spread of the Internet made it feasible to reach alumni.

About the Author:
‘Linton Hall Cadet’ attended Linton Hall Military School during the late 1960s. He graduated as an officer.