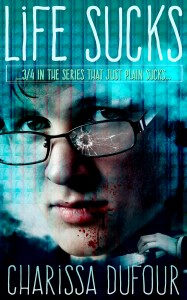 Sometimes life takes unexpected turns. Josh Franklin, a struggling jazz pianist in the 1950s, is about to learn just what sort of mystical turns life can take when you impress a vampire.

What Inspired You to Write Your Book?
My husband and I were sitting on the porch and he ask: What if Stephanie Meyer became a vampire and realized she knew nothing about being a vampire. As I progressed through the trilogy, some readers expressed interest in knowing how the other characters got turned into vampires. This was my first attempt at sharing one of those stories.

How Did You Come up With Your Characters?
My characters are a mixture of friends from real life and creations of my demented imagination.

Book Sample
Josh’s short fingers ran over the piano as if they were skimming the top of a cloud. His instructors had always told his mother he would never be a great pianist because his fingers were just too short. He had proven them wrong, and right in a way. He had become a superb pianist, even accepted into the New England Conservatory of Music, the oldest conservatory in the United States. He had lasted a whole seven months before dropping out.

The short pianist glanced out over the thinning crowd and tried to mask his frustration. He detested noisy drunks, and tonight the place was packed with them. They weren’t here for the jazz. They were here for the booze. Of the fifty or so patrons still lining the bar or sitting around small tables or lounging in the booths, only about ten of them were still listening to his music. Granted, it was Wednesday. He may be skilled enough for the New England Conservatory, but he wasn’t well-known enough to rank the weekend gigs. Still, playing at jazz clubs, like the Birdland, paid the rent.

It was sad to see the place so empty. It could seat 500, and often did on a Saturday night with a star on the stage or a great orchestra in the pit. Not that Josh ever got to see the place full when he performed.

Josh pulled his gaze away from the rowdy soldiers obscuring the long bar with olive-drab dress uniforms. They were enjoying their evening, some so drunk they were having difficulty staying on their stools.

His fingers nearly missed their next cue as he forced his angry thoughts away. Josh had been watching soldiers, dressed in their smart uniforms, pass him by on the street or celebrating in clubs for nearly two years. They shouldn’t bother him anymore.

But some emotions are hard to subdue, Josh told himself as he forced his eyes back on the black and white keys.

He wrapped up his current song and seamlessly transitioned into his own rendition of Moonglow. The slinky tune flowed from his mind, through his fingers, and into the keys. Josh had to admit it was better with a vocalist, but he was skilled enough to keep the melody flowing with only his ten short fingers. Still, it wasn’t enough to keep his mind distracted from the unruly soldiers at the bar. He wanted to be among their ranks. They were risking their lives to keep back the red tide of communism. If the Soviet Union could manufacture an atomic bomb, years ahead of when the U.S. expected it, who knew what the North Koreans could be capable of. Their communist ways had to be stopped before they spread any further.

I should be over there! Josh thought as his worked through a complicated key change.

His mother’s favorite saying came to mind: “If wishes were horses, beggars would ride.” His wishes weren’t any good against the military’s regulations: People who had the vision of rhinos don’t get to join the army.

Josh scrunched up his nose to shift the large glasses, a habit that often produced a scolding from his mother. She hated it when he did that, but when his hands were busy with piano keys, he couldn’t exactly stop to adjust the heavy object resting on his nose. Another hour and the old bartender would begin encouraging the guests to leave. He had one more hour of peace.

Like himself, Josh’s mother was not proud to have her only son working as a jazz pianist rather than representing his country in the fight against communism. This meant most of his time away from the clubs was spent with that one sour old woman. Josh’s father had died in the Second World War, making Josh’s lack of military involvement all the more painful to his mother. It wasn’t his fault the U.S. military didn’t trust him to strap his glasses to his face. Then again, they could break. What would he do then?

Josh sighed again, his eyes drifting back over the audience and resting on a woman with dark black hair, the bangs cropped short in the latest style. Every woman seemed crazy for Audrey Hepburn and her current hair style. Personally, Josh couldn’t see the draw. She was pretty, sure. But he preferred women with a little more flare. Now Barbara Stanwyck, she was a real woman. Josh felt his heart quicken at the thought of her, and forced his attention back on his music.

He knew from experience that thinking about women never made his music better.

Women. Another favorite subject of his mother’s. She couldn’t fathom how a man could remain single while all his competition was on the other side of the planet. Josh couldn’t seem to explain to her that no woman, however desperate, wanted a red-haired, four-eyed man who barely reached their shoulders. They wanted their men tall, robust, and, preferably, in olive-drab. However talented he might be, his talents were only found on a set of ivory keys.

Josh let out another sigh. Why must his thoughts run to his mother and her numerous complaints? Before he could fathom an answer, he noticed the soldiers and their dates pointing at him, their faces turning into scowls. He knew what they were saying:

“Why wasn’t he fighting?”