You are here: Home / Bargains and Freebies / Bargain Books Under $3 / Last of the Dream Warriors: Two Worlds by Natalie Armentani 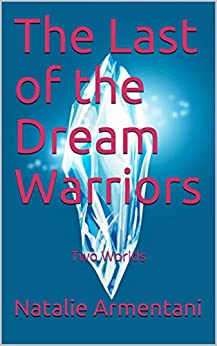 A physically abused teenager has gone through life thinking the only person who truly loved her in life was her dying grandfather. Her grandfather and her two best friends. Nadine wanted nothing more than to have a normal life where she could live without fear and be able to dream. The only thing she would see when she closed her eyes though was a vortex of color she could not penetrate. After her grandfather’s death all that changed. Nadine finds that everything she knew to be true in life was anything but.
Nadine is from another world and just so happened to be royalty, a princess and heir to the throne of the kingdom of Detoriola. The only way to reach this world, the Realm, though is through her dreams. Life in the Realm is more dangerous for her than the only world she could ever recall being a part of, the Real. There is someone hunting her in the Realm, a Dark Lord who believes her kingdom belongs to him. Nadine was sent away to protect her from the Dark Lord. All her memories of the Realm locked inside her are waiting to be released. Her family fears that if she remembered her past life, she will be doomed to repeat it.
Nadine is tethered to two different worlds and must keep her double life a secret for fear of what her friends would do if they ever found out. Especially the love of her life and best friend, Carter. It gets harder and harder to keep her double life a secret as the Realm requires more and more from her. It doesn’t help that Nadine’s power started to manifest stronger than anyone had ever seen before. Still Nadine tries to navigate both worlds without her memories to help guide her. That is until the Dark Lord finally caught up with her.
The Dark Lord kidnaps and tortures Nadine in order to enact his horrid plans for her. The abuse sets something off in Nadine that not only awaken her memories but unleash a power throughout the Realm the likes no one has ever seen before. What the ramifications of this will bring remains to be seen.

What Inspired You to Write Your Book?
What inspired me to write this particular book was in fact a dream.

How Did You Come up With Your Characters?
The characters are based upon people I know individually or combined into one body.

Book Sample
Miriam looked radiant. There was no other way to say it. She was wearing a pale pink suit with a matching sheer pink vail. Her smile said it all though. As we approached Stanley and Stella Miriam gripped my hand nervously.
“Its okay. I will finally be okay,” I whispered to her.
And I had no doubt it would be. Stanley had forgiven Miriam for all her sins. They had opened up with each other like they never had when they were engaged many years ago. Noting was left unsaid. That was the important part. There could be no more secrets between them. this was what they needed to make it work.
It made me think yet again about Carter and our stressed relationship. In my time of isolation, I still could not figure a way our relationship could work. The Realm and all the secrets I had been keeping from him weighed on me constantly. A whole part of me was hidden from him. this was not just about me but all of my people. My omissions, my lies, could not be brought into the light. If I could never be truly honest with Carter how could I ever expect him to ever truly trust me.
I was pulled back from my own thoughts when Miriam and I reached Stanley and Stella. Stanley was in a sharp gray suit looking very debonair. Stella was sporting a pale yellow sundress that matched my own. Mine though had to accommodate my swelling belly. If there had been questions about my state there was none left after seeing me in that dress. It did nothing to hide my condition and frankly I didn’t care. I was hear to celebrate with my new friends.
Miriam squeezed my arms gently before moving toward her man. Stanley took Miriam’s hand with a knowing smile. They stood before the priest together ready to finally take the next steps forward in their life together. I envied them.
I was so very stalled in every aspect of my life and I was about to become a mother again. I still couldn’t recall giving birth the first time so for me the child growing inside me was like my first. Would those memories come back to me when labor finally hit? What happened if I went into labor in the Real? Angelina had been great about trying to help me figure out so much but there was still so many questions unanswered. I was beginning to get frustrated with the number of questions still unanswered by the so-called experts.
“Who gives this bride to this man,” The priest asked, tearing me from my deep thought.
I acknowledged the request. Miriam smiled from me back to Stanley. I could not recall such a time in my life I was ever as happy as she was marrying Stanley. The weight of the world seemed to always be on me, two worlds actually. How I longed for one day without the responsibility of two worlds on me. still I was born into a world where I was a princess. One day I would be queen. I had no idea what that truly meant but I didn’t care either. Once I was queen, I could write my own rules.
The priest announced the union of Miriam and Stanley. Stanley presented Miriam with a sweeping kiss to which Stella and I applauded. Stanley then thanked the priest before we all headed from the church. Even though Miriam had not wanted a big wedding Stanley had insisted that they have a reception. He wanted his family and friends to celebrate his new bride. Miriam had invited very few people since her life had been lived in such isolation after she stepped out of the limelight. It was a beautiful sight to watch Stanley’s family accept Miriam with open arms.