You are here: Home / Fiction / Romance / Knight of Rapture by Ruth A. Casie 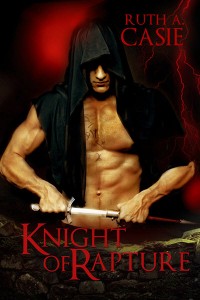 He crossed the centuries to find her…
For months Lord Arik has been trying to find the right combination of runes to create the precise spell to rescue his wife, Rebeka, but the druid knight will soon discover that reaching her four hundred years in the future is only the beginning of his quest. He arrives in the 21st century to find her memory of him erased, his legacy on the brink of destruction, and traces of dark magick at every turn.

A threat has followed…
Bran, the dark druid, is more determined than ever to get his revenge. His evil has spread across the centuries. Arik will lose all. Time is his weapon, and he’s made sure his plan leaves no one dear to Arik, in past or present, safe from the destruction.

But their enemy has overlooked the strongest magick of all…
Professor Rebeka Tyler is dealing with more than just a faulty memory. Ownership of Fayne Manor, her home, has been called into question. Convenient accidents begin happening putting those she cares for in the line of fire. And then there’s the unexpected arrival of a strange man dressed like he belonged in a medieval fair-a man who somehow is always around when needed, and always on her mind. She doesn’t know who to trust. But one thing is certain. Her family line and manor have survived for over eleven centuries. She won’t let them fall, not on her watch… in any century.

What Inspired You to Write Your Book?
Knight of Rapture is the second story in the Druid Knight Tales and is a follow-up to Knight of Runes. Many of my fans requested that I tell them more about Lord Arik and Rebeka. I wouldn’t be surprised if there was a third book out by the end of the year, Knight of Redemption!

How Did You Come up With Your Characters?
Women today are independent and self-sufficient, a far cry to the way they were four hundred years ago. How would a woman raised in the 21st century deal with people in the 17th century? How would an ‘alpha’ male deal with her? That’s what started me thinking about this story.

Book Sample
She took another step and past the stone marker.
The air chilled and the sky turned an array of colors. Everything around her began to swirl. She realized her mistake too late. The portal, she was in the portal.
Arik. Close to him now, she reached for him, but her hand passed through the form. She examined her hand turning it over then spotted the shadow of the man.
An illusion?
The shadow turned towards her. She watched as the wind washed over his face and it changed. “Bran,” she whispered in disbelief. Her head swiveled while she searched for something, anything to grab on to. The portal had one use and she had no intention of leaving.
Get out, her brain shouted.
His lips twisted into a cynical sneer. He tilted his head in jaunty satisfaction, snapped his fingers and vanished.
“No,” she yelled. “Arik,” she closed her eyes and screamed in her head trying to mind-touch him while the wind tore at her.
“Beka,” he boomed.
Her eyes snapped open. She shielded them from the dust and debris and stared at Arik on the other side of the opening. He stood on the high plateau, miles away. His hands were braced on the opening’s edges, which were nothing more than solid streams of whirling wind. He struggled to keep the portal from closing.
“Come.” His voice didn’t allow for any argument.
The wind whipped at her, pushed her back. She tried again. “I can’t. The wind. Keeps. Pushing. Me. Away.” She shoved her staff in front of her and anchored it into the ground. Against the gusting wind, pulled herself towards him.
“A little more, Beka.” He gripped the edge of the portal with one hand and stretched the other out to her. She shoved her hand towards him as far as she could. The tips of their fingers brushed. In a burst of effort, he caught the top of her hand, a precarious hold. With a tight grasp, she wrapped her fingers around his thumb.
Safe, she wasn’t far now.
She concentrated on his face. The corners of his mouth turned up as he pulled her towards safety. The wind grew stronger buffeting around them then changed its path.
Before she could brace herself for the new direction, the gust blasted them. Without a firm grip, her hand began to slip. She pushed through the building panic. His smile slipped. The expression on his face turned to determination. Again her hand slipped until he held her by her fingertips.
He held them fast, crushing them, but that didn’t matter. He had to hold on to her. Every muscle strained. Inch by inch he brought her closer to him. She tried to help him the best way she could. Anchored to the edge of the portal, Arik encouraged her on. But his alternatives were limited. The closer she got to him, the stronger the gale blew. Just a little closer, that’s all she needed for Arik to grab her and get her out of the portal.
The wind exploded from another direction.
The blasting gale pushed her staff away from the opening, across the dirt, cutting an ugly scar in the ground and dragging her away with her staff.
Away from Arik.