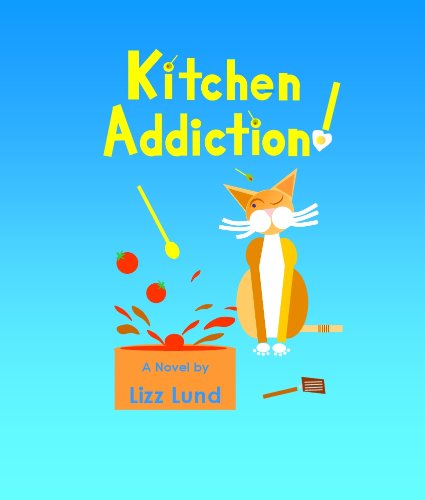 Meet Mina Kitchen, a forty-something single who likes to cook – and cook and cook.  In fact, her zest for whipping up trays of canapés is dwarfed only by her weird luck and mountain-lion size tabby cat, Vinnie.  That, and her godmom’s tendency for blackmailing new members into joining St. Bart’s.  Okay, maybe Mina’s Swiffer-addicted neighbor, Vito, is a bit weird, too.  As if all that wasn’t enough, Mina’s a Jersey girl transplanted in the midst of the Amish-flavored countryside of Lancaster, PA.

Things get really complicated when she learns that her neighbor Vito is in a witness protection program, and her dry cleaner deals in prescription samples. Throw in a few mysterious flaming feces flingers and a fuse box labeled in Arabic, and you have a recipe for catering disorders.

Well, some of the recipes are real.  The others you might to take with a pinch of salt, and some Tums.

How Did You Come up With Your Characters?
People watching; daydreaming – making-pretend in my head… and naming most after family.

Book Sample
I gave Bauser the pouch with the insurance stuff and told him I’d meet him at my house. I wasn’t worried about Bauser or Norman having to be let in, since Ma was camped there. Then I raced back into our building to the tune of sirens in the background. I limped back up seven flights of stairs to EEJIT, opened the door to the lobby and everything went black. Again.

I came to strapped to a gurney being hoisted down the stairs. Which was probably why I started screaming like a banshee, which scared the volunteer rescuers. They responded by dropping me. The gurney responded by racing down all seven flights and lurching bumper-car style out of the building, through the courtyard and into traffic. I shot out, clattering and screaming, smack dab in the middle of Queen Street.

Soon, a few confused volunteer Fire Police and ambulance workers surrounded me. Once they realized I was conscious and irate, they unstrapped me, picked up their gurney and went home. I rubbed my head and sat on the curb. A fella in a trench coat came up and looked at me, then stared at the building. “I’m sorry,” I said, rubbing my head, “but I think all the offices are closed.”

“I AIN’T NO DAMN OFFICE WORKER!” he raged. “I’M A BAG MAN!” Then he huffed away. This bagman was clearly not from Lancaster.

I tried to stand up but my knees saw double.

“HEY, MINA!” a voice called from what sounded like very far away. It was Trixie, and she was sitting on the curb right next to me. “Oh boy, you look like heck,” she said. Heck? You see what I mean? That’s about as edgy as it gets with Lancastrians. “C’mon, I’m taking you home,” she said. I shook my head and saw stars.

“And Aunt Muriel. And Vito. And Bauser, and I think Norman… oh my.”

“What is this, a convention? C’mon, you can’t keep sitting here on the curb. Somebody’s doggie will piddle on you.” Made sense to me. “Although you might not smell too much worse. What in the world happened to you?”

I sighed and gave Trixie the punch list about Flower, tomato juice, a pound of bacon, and perfume. Trixie sniffed. “Well, you do smell mostly like bacon, at least,” she admitted.

We got up – or that is, Trixie dragged me up, and I wobbled.

“Where’s your purse?” she asked.

“THE THING YOU KEEP YOUR WALLET AND YOUR KEYS IN,” she said loudly. Apparently Trixie was confusing being concussed with being deaf. I shrugged. Trixie shook her head, got me up, and marched me back toward EEJIT’s offices. After accosting several policemen, EMTs and an off-duty nun (by mistake), Trixie gave up on my handbag.

“The officers said they’d keep an eye out for it,” she said. Her eyes got slitty.

“You’re not gonna use this as an excuse to get in touch with Appletree again, are y ou?” I winced. I couldn’t take Trixie’s on-again, off-again romance. It wasn’t so much because of the other woman thingy. I just couldn’t handle the lack of continuity. And her breakdowns always made me nervy. If Trixie could get broken down that easily over a romance, I didn’t stand a water ice’s chance in Central Market in summer. That is, if I ever weathered another romance.

Trixie replied, “I’m a taxpayer. Not using available police resources is wasteful.” She looked off dreamily into the distance. I winced. Yeeshkabiddle.

About the Author:
Lizz Lund loves Lancaster.  Since 1999, she’s been having a terrific time here and thinks everyone else should, too.  She is a newlywed and head-over-heels about her chef husband; she made him move from New Jersey, too.  Kitchen Addiction! is her first novel of the Mina Kitchen series.  Lizz grew up in Glen Rock, New Jersey and still hasn’t recovered.  She holds a BA in Musical Theatre from Syracuse University, but has never learned to waitress.