You are here: Home / Fiction / Mystery/Suspense / Kept by Tracey Lampley 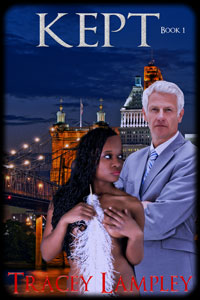 Sex, lies, murder: It’s hard walking away from a married man. It’s even harder running away from a murderous one! Sexy Kate Mercer refused to return the jewels, the car, and the condo. As the former mistress of a public figure, Kate finds her life and that of her unborn child in danger as she faces a formidable opponent. This is who-done-it with a shocking twist!

Targeted Age Group:: Adult 18 and over

What Inspired You to Write Your Book?
Two associates of mine were kept women and so was a woman I worked with.

How Did You Come up With Your Characters?
I sketched my characters based on the women I knew. I blended some characters in order to avoid anyone knowing the true identity.

Book Sample
Kate collected her mail from the kiosk located in the lobby. After sifting through the junk mail, she came across an invitation to a Black Tie event to a charity dinner on behalf of Children’s Hospital. Kate knew that Cary secured her invitation, as he loved to see Kate dressed up, so he could steal a few moments of sexual pleasure with her. Like at that charity for cancer research.

Kate and Cary were in the packed ballroom waltzing, when they’d glided to the terrace. Cary looked regal dressed in a tuxedo. His granite features had softened. She could feel his urgent desire for her straining against the tux.

Kate seized his penis. He gasped and gazed down at her as she worked his penis into a rod of lust. He snatched his silk handkerchief from his breast pocket. “Take this now.”

Elizabeth Grant had sauntered over to them. She was but yards away. “Carrington, I’d like a word with you, darling,” she’d said.

Kate snatched the hanky and discreetly wrapped it around his throbbing penis until his penis went slack. Cary had smiled down at her and said, “I’m glad we came.”

Kate had stuffed his limp penis, still wrapped in the soiled silk hanky, inside his trousers and zipped them just as Elizabeth advanced to within ten feet of them. Kate warned, “I’m glad you came because your wife is staring daggers at us.”

Looking back on that evening brought a smile to Kate’s face. Now Kate shook her head. It was time for Carrington “Cary” Grant Sr. to divorce Elizabeth and give their child his name. Tonight Kate intended to let Cary know she’s eight weeks pregnant—not because she loved him. On the contrary, she was beginning to loathe him and his demanding ways.

How had she allowed herself to be kept? But that was then; this was now. It was the reason she’d bought the condo—to ensure her independence from him in case he balked at marriage.

Kate was thinking about all of this while she jogged the six blocks to her bank and couldn’t shake the inexplicable feeling she was being followed. But when she glanced over her shoulder, no one stood out. So she entered the bank pulling her id from her fanny pack.

“There’s a hold on your account,” said the frosted-haired middle-aged teller.

Kate frowned, a bit confused. “A hold? For what?” She eyed the teller and thought, was it possible the powerful Carrington Grant Sr. had found out she’d pawned the glamorous baubles he’d gifted her? But that would mean he had someone working with him on the inside of the bank.

“It looks like someone tried accessing your account by computer, and the login warnings shut it down. It’s a safety precaution.”

Kate closed her eyes and sighed. Changing her password was the smartest thing she’d done this week besides purchase the condo. And her secrecy was probably giving Cary fits. Now he was wondering what she was up to.

“All you have to do is change your security questions, and we’re done.” The teller smiled.

Minutes later, Kate made the changes and made the transfer. Her mother’s utilities would be paid, she was thinking as she set out to return to her condo. As she passed the bakery, she glanced in the side mirror of a FedEx delivery truck and glimpsed a man in dreadlocks seemingly trailing her. A wave of fear washed over her, and she wasn’t sure of the reason. Perhaps her experience of seemingly being chased from her garage dictated her fear now. If it wasn’t for her experience last night, would she have taken off in a flat out run now?

She was sprinting down Seventh Street, weaving in and out of the paths of passersby when she collided with an immovable object.

“Whoa!” The uniformed police officer’s massive arms enveloped Kate. An electric charge shot through her. It was like nothing she’d experienced before. She could smell his aftershave. He set her down and stepped back. “You okay, Katrina?”

It was Lamar Burton, her ex and the man Kate had spurned for Carrington Grant. Kate swallowed. He was somehow taller than she remembered—about six foot two—and chocolate. His name tag identified him as Officer Burton. And he was built like a tank. His crescent moon eyes were twinkling.

“I-I think I’m okay,” she stammered. As her tummy fluttered, Kate thought be still, my child.

“You don’t look okay. Not that you look bad, but you look terrified.”

“That’s because I am—was. I thought someone was following me.”