You are here: Home / Fiction / Fantasy / Kalki Evian – The Ring of Khaoriphea by Malay A. Upadhyay 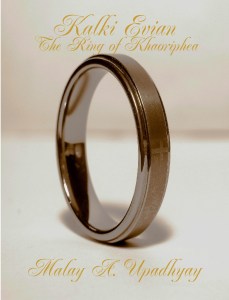 Every choice we make leads to its own unique consequence. To change the consequence, therefore, one must travel back in time to change the choice. But what if such change, instead of altering our future, simply created another – one that came to exist simultaneously with our world?
This is a story of how one such moment of love led to two parallel futures; a story of how your choices have an impact far beyond the world you know; a phenomenon that we had sensed, and wished for, all along. Set in Italy, while one timeline scales a city of the future where not just people but also things like money evolve, the other cradles itself in an amalgamation of contemporary Europe with ingredients of a new age. Step by step, the story embarks on a journey in a parallel world that we all live in but rarely see.

What Inspired You to Write Your Book?
The futuristic ideas for Kalki Evian came to me during my time at Bocconi University in Milano. However, I am more drawn towards subtle romance in any story. That is primarily because I find it to be the most natural form of conduct between characters. It lends the strongest incentives to their actions and gifts a sense of beauty to any plot under any circumstance. It is also what makes the characters human, and the story, regardless the genre, have a soul. That is how the plot took shape.

How Did You Come up With Your Characters?
My characters are a mix of three things: an overview to begin with, an inspiration from people I know, which gives them a shape, and their reactions which begin to unfold in each scene and situation as the story progresses, for it lends a level of detail that you could not have imagined at the beginning.

Book Sample
He looked up at Bree, suddenly with a sense of power of an unexplained nature. He did not have enough knowledge of this new world but that was exactly what gave him a bigger incentive to learn and to grow. He had a lot to catch up on and to do so, he would need to survive the situation he found himself in at present. There were things unexplained, ones he could only guess at, but he was beginning to see light at the end of this short tunnel. The two individuals confronting him were both at ease in their space, aware at all times of the simple truth that in this world, they were older than him in knowledge and in power, regardless their age. To reach the light that now beckoned him, he needed to verify his assumptions. With that singular intent, he moved towards the mirror once they had reached his room. Bree would have noticed this but Qin diverted him with his question, “You know so much about me but you are still shy of telling me who you are. Isn’t it unfair?”
Bree had been engaging in a play of virtual virtues. Challenged in his own play, he concurred, “It does. If you wish to know about me, you certainly shall.” He tapped on his gloved screen while Qin did so on the mirror, feverishly reading through something over his reflection. The analysis was short-lived as the humble white walls dissolved themselves into a fuming mix of colours. Qin stepped back as the projections began to surround them. He was familiar to such change but still nested himself in a spot as the entire room widened its expanse to present a world that stretched farther than he could have imagined the new IT systems to ordain in their résumé.
Thunder sounded loudly. All of a sudden it felt too cold for comfort. Qin’s amazement, Friuli’s reservation & Bree’s loquaciousness found their sources stand upon an apparent field of near-black gravel that seemed to slip beneath them. Its slope was gradual further downhill on one end but nearly exponential as it curved upwards on the other. Intermittent blocks of stone shining in absolute black over the ground which itself was draped in a gradient of black, brown and red, surrounded them. Somewhere far downhill, faint patches of green showed while the horizon was bordered with ripples of black. There lay the dark ocean, calm and hollow, but too far. Qin looked up, covering his chest against the biting chill so high up on the mountain. Much above, the peak stood, tall and commanding against the radiant night sky, gleaming on its edges in bright red. Every now and then its insides would grumble and send an added shiver down his spine. It felt as if the earth would move or hiccup at any time beneath his feet and even the firm solidity of its surface could not be trusted. Wind was fierce and worsened both the cold and the wavering ground. Clouds were thick under the roof that had vanished well and truly over the dark humiliation of that covering of fumes and gases. The sounds were majestic and any intrusion was faint, as Qin realized when Bree spoke less than a foot from him, “You wanted to know about me? Here it is.”
It had been a shout but was subdued by the thunder and roar in the sky. Qin looked at the tumultuous peak, flashing out warnings every second. He turned to Bree and asked, “A volcano?”
“Mungibeddu – my love, my tragedy, my home,” Bree said, staring at the peak in awe. He turned to point at a distance, “Do you see that vast barren stretch along the coast? Cities of Catania and the ever-beautiful Siracusa lay nestled there once. . .

Buy Kalki Evian – The Ring of Khaoriphea On Amazon