You are here: Home / Autobiographies, Biographies & Memoirs / Jungle Jean: The Life And Times Of Jean Liedloff, The Woman Who Transformed Modern Parenting with The Continuum Concept by Geralyn Gendreau 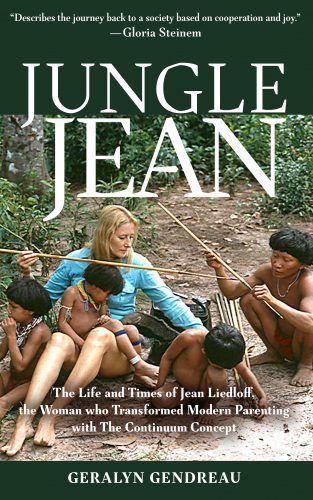 “Jungle Jean” Goes Beyond Childrearing and Offers a Vital, Uplifting Message for Our Times

“Jungle Jean”, is the official biography of Jean Liedloff, acclaimed author of “The Continuum Concept”. Author Geralyn Gendreau captures the essence of Jean’s phenomenal life story and the natural parenting movement inspired by her book, including real-life stories — never before published — that bring a deeper understanding of continuum parenting principles and the woman who brought them to light.

Jean’s story spans the better part of the 20th century, including scenes from her childhood in Upper West Side Manhattan, her life as an ingénue modeling for Paris Vogue, the legendary “Party of the Century” on the Grand Canal in Venice, and her unusual alliance with the Italian count she convinced to take her along on a diamond hunting expedition in the Venezuelan jungle.

While living in the jungle among indigenous people, Jean’s experiences caused her to question our culture’s basic assumptions about human nature.

Told through both a compelling narrative and revealing dialogues between Jean and Geralyn, JUNGLE JEAN is the significant story of a woman who challenged cultural norms both in her life and in her gift of insight to the world. It is also the intimate record of a relationship between two women who taught and fought each other in the service of mutual respect and affection.

Jungle Jean Has Been Endorsed by Bestselling Authors!

“Jungle Jean … shows how we can make the journey back to a society characterized by cooperation and joy.” — Gloria Steinem, The Revolution Within

“The principles of intuitive parenting Jean Liedloff witnessed in the Amazon rainforest and wrote about in The Continuum Concept are valued worldwide. This riveting read gives parents tools to raise more competent and confident children.” — Dr. William Sears, The Attachment Parenting Book

What Inspired You to Write Your Book?
In 1992, shortly after I finished graduate school, a friend handed me a copy of The Continuum Concept. Jean Liedloff’s seminal book shook me to the core and cracked my heart wide open. I simply had to meet the woman.

A few weeks later, I attended a talk she was giving in San Francisco. Her statuesque bearing broadcast her authority as she stepped up to the lectern, but her warmhearted welcome seemed at odds with her stiff body language. Her manner softened when she spoke of the indigenous people she’d lived with in the jungle.

She told of their way of life and how they treat their children, touching a part of me that had long since been abandoned. I was moved to tears by her insights into the root cause of alienation, that sense of being separate that creates so much tension within and between people. She touched on difficult topics such as criminality, addiction, and what she termed anti-self feelings with that just-right touch of humor that makes it possible to hear painful truths.

Half an hour into the lecture, I felt so at ease, so enchanted by her playful panache, the abandoned part of me wanted to crawl into her lap. Our conversation after the lecture was the beginning of a mentoring relationship that blossomed into an enduring friendship and lasted to her final days. While on her deathbed, Jean asked me to be her biographer. It was the assignment of a lifetime. Needless to say, I was all in.

Book Sample
"Jean on Child Rearing"
One day while Jean and I sat at the Depot, she nodded toward a mom who was scurrying around the square trying to catch up with her toddler. “Luther, go pick up your dump truck. Time to go home and see daddy.” The boy ignored her. Again, she said, “Luther, honey. We’re leaving now.” Thirty seconds passed. The exasperation on his mother’s face left no room for doubt: her patience was spent. In fact, she appeared to be running on a negative balance. “Luther. I said, Pick. Up. Your. Toy! Mommy is ready to go.” She walked over to the boy, took him firmly by the hand, and all but dragged him over to the dump truck.
Jean whispered to me, “The tone of her voice communicates her expectation that he will disobey.”
I said, “She’s training her son to ignore her?”
“That’s right,” she said. “My advice to parents is: never say anything twice. Say it once with complete confidence that the child will obey, then go about your business.”
“What if he doesn’t do what she tells him to do?”
“Just ignore him. Children hate to be left out of the action.”
“So, she should get in her car and drive away?”
“Of course not,” she said, “If he doesn’t act on her request within a minute, maybe two, she simply walks over to him, takes him by the hand, and gently shows him what she wants him to do. No anger. No scolding. No cajoling or bribing or threatening. Simple confidence and direction that gives him the information, that says: this is how we do it in our tribe.”
She must have explained this to me half a dozen times, but I was aware of the immense challenge for parents. It was difficult for even the most devoted mother or father to overcome their exasperation and see the situation through what they typically see as a radical new perspective at first. Many found it nearly impossible to trust their child and break the habit of issuing commands. From what I’d seen, it was almost too much to ask.
“It isn’t,” Jean would say. “Not if you factor in the long-term benefits.” She was always trying to educate me, to impress upon me what she called the requirements of the Continuum.
“Think of it this way, darling. How often have you heard parents tell their child: ‘You be good.’ Mom and Dad are taking Johnny over to grandma’s house. Mom says: ‘Now Johnny, you be good for your grandmother.’ What her tone of voice says is: ‘Pretend to be good, because we know you are bad.’ She has just reinforced his growing sense that he is not trustworthy, which is a tragic mistake for all concerned.”

Links to Purchase Print Books
Buy Jungle Jean: The Life And Times Of Jean Liedloff, The Woman Who Transformed Modern Parenting with The Continuum Concept Print Edition at Amazon

Links to Purchase eBooks – Click links for book samples and reviews
Buy Jungle Jean: The Life And Times Of Jean Liedloff, The Woman Who Transformed Modern Parenting with The Continuum Concept On Amazon