You are here: Home / Fiction / Science Fiction / Journey Back To Threa by Cindy Cowles 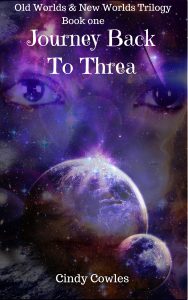 For two thousand years, there has been a spaceship hidden on the dark side of the moon. Very few know of its existence, and only one has known its location. That one was High Councilwoman and Captain Estelle Morgan, Lacy’s grandmother and one of the original survivors from the planet Threa. When Lacy’s grandmother chooses not to Rebirth again and passes away, Lacy inherits the house, a tantalizing letter about humanity’s true origins and…a FTL spaceship called Pegasus I. Forced to flee when her home is invaded by a group called the Chosen, and her life and the lives of her three closest friends are threatened, Lacy brings her friends aboard an atmospheric hopper – a small transport meant to shuttle explorers from Pegasus I to a planet’s surface and back – and escapes just in time. Now she’s taking them on the trip of a lifetime, going on a Journey Back To Threa.

What Inspired You to Write Your Book?
This particular book – and the other two that will be coming after – have been in my head for years. I actually wrote a version of it, once, only to have the old notebook computer die, taking that version with it. Refusing to die, it stayed with me, so I feel I owe it, to tell it, the best I can.

How Did You Come up With Your Characters?
I can’t claim to have come up with my characters. They’ve been in my head, waiting patiently – and not so patiently, at times – for me to write out their story.

Buy Journey Back To Threa On Amazon