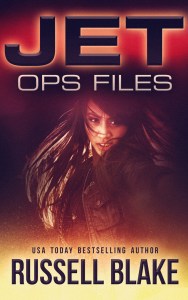 JET – Ops Files chronicles the early years of Maya, who would go on to become the Mossad’s deadliest operative: the assassin known as Jet. From the West Bank to Tel Aviv to Jordan to Singapore to Indonesia, Ops Files is a breakneck adrenaline rush that will leave action thriller fans gasping.

What Inspired You to Write Your Book?
After writing 5 volumes of my bestselling JET series, I wanted to explore the past of the heroine – basically answer questions about her life before she quit the Mossad and faked her own death. JET‎ – Ops Files begins when she’s just starting her obligatory military duty, and follows her as she’s recruited into the Mossad.

How Did You Come up With Your Characters?
The characters are largely based on the JET series, although I take pains to introduce a host of new faces. Fans of JET are sure to enjoy JET – Ops Files.

Book Sample
The youth did as instructed, and Maya took a step forward. With her free hand, she chopped the punk’s neck where she knew a pressure point lay. She must have missed, because he grabbed her arm with nearly enough force to fracture it just as she drove her pistol barrel into his nose, breaking it with a sickening crack. His grip on her relaxed as the youth by the wall went for his weapon again. She kneed the injured attacker in the crotch with all her might, dropping him hard as she brought her gun back to bear on the one by the wall, hesitant to shoot him for fear of the attention a gunshot would bring.

About the Author:
Featured in The Wall Street Journal, The Times, and The Chicago Tribune, Russell Blake is the USA Today bestselling author of twenty-nine books, including Fatal Exchange, The Geronimo Breach, Zero Sum, King of Swords, Night of the Assassin, Revenge of the Assassin, Return of the Assassin, Blood of the Assassin, The Delphi Chronicle trilogy, The Voynich Cypher, Silver Justice, JET, JET – Ops Files, JET II – Betrayal, JET III – Vengeance, JET IV – Reckoning, JET V – Legacy, JET VI – Justice, JET VII – Sanctuary, Upon A Pale Horse, BLACK, BLACK Is Back, BLACK Is The New Black, and BLACK To Reality.

Non-fiction includes the international bestseller An Angel With Fur (animal biography) and How To Sell A Gazillion eBooks In No Time (even if drunk, high or incarcerated), a parody of all things writing-related.

Blake is co-author of an action/adventure novel, The Eye of Heaven, with legendary author Clive Cussler, to be released by Penguin in September, 2014. Blake’s novel King of Swords has been translated into German by Amazon Crossing, and his JET novel into Spanish by Reprobatio.

Blake lives in Mexico and enjoys his dogs, fishing, boating, tequila and writing, while battling world domination by clowns. His thoughts, such as they are, can be found at his blog: RussellBlake.com