You are here: Home / Fiction / Fantasy / Into the Realm: The Chronicles of Carter Blake, Book I by R.w.Foster 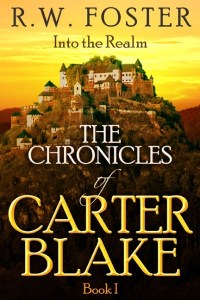 Fourteen-year-old college student, Carter Blake, aspires to become a Nobel Prize winning physicist until the night the villain from his favorite tabletop role-playing game shows up in person and turns his life upside down. Drawn into the setting of BattleHammer, he begins a journey of self-discovery and learns his destiny is much different than he expected.

Carter faces many challenges in the realm of BattleHammer. First, he’s blinded while watching an angel fight an eldritch abomination. Then his new friend, a warrior princess, is abducted, so he sets out with a half-dragon warrior and a half-elf mage to rescue the princess. After regaining his sight, Carter discovers he has the ability to peer a few seconds into the future.

Some claim he is a Walker of Worlds, a man with immense powers. Is he? More important, can he end a war caused by his own avatar from BattleHammer?

What Inspired You to Write Your Book?
I wanted to write a Dungeons and Dragons novel for Wizard’s of the Coast. They said, “No.” I decided to write for me, instead. So, my book is inspired by D&D, but isn’t it.

How Did You Come up With Your Characters?
To be honest, I don’t really remember how I came up with them. All I remember was the premise – which is the same as the old D&D cartoon but modified: A kid who plays a table top role playing game ends up pulled into the world of said game. As he journeys though the Realm, he learns he’s more than someone on an adventure.

Buy Into the Realm: The Chronicles of Carter Blake, Book I On Amazon