You are here: Home / Interviews With Authors / Interview with Author – William David Ellis 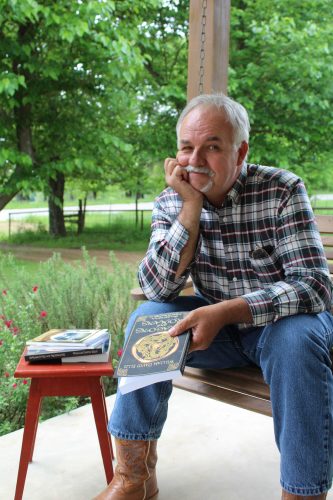 About William David Ellis:
William David Ellis is an award-winning author. Other than that, he is the son of an English teacher, the husband of an English teacher, and the father of an English teacher. In spite of them, he occasionally punctuates. He has written fantasy novels, and short stories. He writes in East Texas dialect (which covers a multitude of grammatical short comings!)
Novels:
• Dragons and Romans
• The Harry Ferguson Chronicles: The Princess Who Forgot She Was Beautiful
• Dances With My Dragon
• Kisses of My Enemy (which reached the high mark of being ranked #1 in Christian Fantasy on Amazon)
• In his new Sherlock Holmes series, he has finished the first book, Angels Saints and Sinners the Conversion of Sherlock Holmes, and has the next one with an editor.
He has a wife and six adult children, two master’s degrees and a doctorate. He raises honeybees, and gathers a lot of his stories from a small café where he just sits and listens and laughs.

He was a third grader when he wrote his first novel. It was three hand written pages. It didn’t sell well. He writes because he loves words and stories, when he discovered people loved his story telling, he took the risk and started writing to publish

What inspires you to write?
My mother read Edgar Rice Burroughs to my brother and me when we were in kindergarten, I cut my teeth on Walt Whitman books, the classics of Jules Verne, etc,, so I was a reader before I could talk, and my first word was ,”book” I actually attempted to write a book in the third grade, then skipped several years and published in the sixth grade, school publication, then started writing again in college, and over the last 30 years wrote several short stories, a few newspaper columns, and started seven or eight different books that are in various stages of remission.

What authors do you read when you aren’t writing?
Depends on the day, I love fiction, fantasy, action, right now, Jim Butcher is my favorite , but that may change tomorrow. Why do I Like him? He is funny, a great descriptive writer, can really manipulate a plot, and seems able to hold interest all the way through a series.

Tell us about your writing process.
Well, I thinks about it, then I thinks some more, then I swells a bit, and then I explodes. Or so my father’s brother would say. And as I truly consider the process I think there is merit in that old man’s idea. I write scenes, a multitude of short stories that converge in the end. They get funneled down an ever decreasing plot line, each thread of story has to fit, to fill out the greater novel. Usually it does and where it doesnt I say ok sequel time.

For Fiction Writers: Do you listen (or talk to) to your characters?
I did not think I spoke aloud to my characters until I had surgery last month. for two days i had a bad reaction to the pain meds. I was out of my mind. My wife swears, and she is a godly woman and rarely does, that I had long conversations with my characters. so yes i suppose when i am out of my mind, I host them.

What advice would you give other writers?
Learn the craft read books about writing.
Write, write write! writers block is in your head, not in your fingers, type when you do not feel like, even if you have nothing to say. You have to jump start some manuscripts some mornings, but if you start writing, even if it is not very good, you will slip into the flow and then you can come back and delete the first few sentences, but if you do not absolutely force yourself to put something on the screen you will wait for a flow that never comes, you have to drill a hole before you hit water.
Don’t worry about being a planner of a pantser, most writers are a bit of both

How did you decide how to publish your books?
It wasn’t much of a decision. Amazon offered an avenue to immediate publication. I took it. sometimes you have to jump in the water before you learn to swim. I jumped and it has taken four years and thousands of dollars, to learn to float. just to keep my head above water. but it is worth it.. you have to risk you have to invest in yourself… some people work on a single manuscript polishing and perfecting and never take the plunge.

What do you think about the future of book publishing?
Like everything it will evolve. and like everything those who adapt, who learn, and who have talent will eventually rise to the top.

What genres do you write?: clean/cozy Fantasy romance