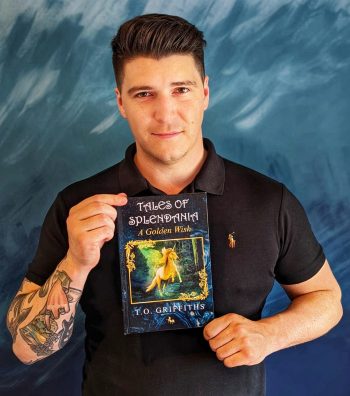 About T.O. Griffiths:
Born and raised on a farm overlooking Hay-On-Wye, the World's first Town of Books, nestled between Hereford and Brecon on the border of Wales and England, T.O. Griffiths grew up fascinated by animals and sharks. He was lucky enough to be surrounded by farm animals – including the magnificent peacocks – and a stunning view.

As a boy, he used to write short stories and poems, somewhat inspired by Alice in Wonderland.

With a large collection of swords, axes and armour himself, his fascination with weaponry has helped inspire certain characters T.O. Griffiths has created in his debut fantasy book, Tales of Splendania.

With a busy job and life moving forward, time to focus and complete the book became a labour of love for T.O. Griffiths, but something he was determined to accomplish.

The story coming into existence was completely spontaneous; he was asked to make up a bedtime story for his girlfriend to help her sleep. It was not helpful, however, as he was then up all night, writing it down instead of finishing the story for her, until now.

Tales of Splendania had been rattling around T.O. Griffiths’ head for many years and the story evolved and swayed this way and that, and now, he is extremely excited to share it with you and hopes you enjoy it as much as he has enjoyed creating the World of Splendania.

The story continues in Tales of Splendania: A Heart of Ice, which takes Princess Vanadae and Prince Galderon on more whirlwind adventures throughout Splendania and beyond!

What inspires you to write?
I am inspired by places I have been, in real life and virtually in video games. I grew up surrounded by animals and amazing scenery with a louder-than-life family that make lots of wine.

Several characters have been moulded by my own family members and I always try to give a sense of home and belonging in my writing.

What authors do you read when you aren’t writing?
Stephen Fry for his Mythos, Heroes and Troy series. I absolutely love Greek Mythology and couldn't put them down.

Tell us about your writing process.
My writing process is quite unorthodox and sporadic. I would love to use a giant whiteboard to outline plans and character motives/story arcs etc, but my usual method is to use a Google Docs and list the main plot points, usually at this point I have several key quotes I want important characters to say in the book, and I write them down in that document along with who they're saying it to and why.

When I begin writing, I sometimes jump ahead to later chapters as it comes to me. I find it important to write whenever thoughts or the progression of a storyline comes to mind.

I also write short descriptions of the key characters and their specific weapons. I would like to have character sketches, which is something I may start doing.

Like most authors these days, I work full time too, so getting the time to focus solely on writing is very difficult and takes a lot of passion.

The key is to refer back to my original list of plot points and story outline, and ALWAYS keep a notebook or notebook app on your phone so wherever I am I can write ideas to incorporate when I have time to sit and concentrate!

For Fiction Writers: Do you listen (or talk to) to your characters?
I don't necessarily talk to the characters, I try to speak as them. So whatever I've written for them to say, I read back aloud in the tone they are speaking to ensure it sounds right for the character and the situation.

What advice would you give other writers?
Take your time. I was extremely determined to finish my first book by a certain date, which I imposed upon myself for no real reason other than it helped me focus on finishing it.

It sounds like a cliché, but genuinely, try to enjoy the WRITING of it, rather than thinking of everything else that comes after like the marketing and promotion. We write much better and easier when we simply write our stories.

How did you decide how to publish your books?
I didn't know what to do when I was at the publishing stage. I was very new to it and had to learn the hard way, luckily a friend of mine is an Author and she helped me navigate the minefield of Vanity Presses and scam artists out there.

I was offered a 'hybrid contact' by several, but ultimately, decided against that as I had already bought the ISBN numbers and designed the cover myself and published it in my own name.

I am still open to traditional publishing and a traditional contract, but finding them is very difficult for new authors, especially without agents. One day, perhaps!

What do you think about the future of book publishing?
I think self-publishing is very much on the rise, which is a double-edged sword. The competition is already incredibly large, therefore, as 'easy' as it is to self-publish, the competition rises.

But I encourage it, we all deserve to write our books and achieve the fact we have published a book traditionally or self-published.