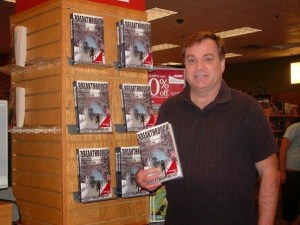 About Stephen Tremp:
Stephen Tremp writes Speculative Fiction and embraces science and the supernatural to help explain the universe, our place in it, and to write one of a kind thrillers. His novels are enhanced by discoveries, breakthroughs and current events in many fields of science. Understanding Albert Einstein’s famous equation E=MC2 explains how the natural and the supernatural co-exist and compliment each other.

What inspires you to write?
It’s a passion that never goes away. I do not want to lay on my deathbed and regret never writing my books, wondering “what if?”

Tell us about your writing process.
Some authors pick marketable genres then develop their book ideas.

Others just write the story then choose what category it falls into.

I’m a member of the latter.

I first write my stories, then worry about the particular genre(s) only after I’m finished. The most important piece to the puzzle is that you have an understanding of the basics of each a genre and the differences between them. You don’t need to be too particular as no two experts will agree on every detail. There are blurred lines and overlaps for sure. But know the basics.

My approach to choosing a genre is as simple as you can get. For example, when I was done writing my latest project, I took a step back then thought about the usual suspects: mystery, suspense, action, adventure, thriller, and science fiction. After serious considering the plot and characters, it was very clear to me that it was a thriller. There’s protagonist. There’s a villain. There’s a battle. There are obstacles along the way that the protagonists must overcome. My villain is a sinister unseen other-worldly element, which pushes my book into supernatural thriller territory. The emphasis is mainly on suspense rather than horror, although there is certainly horror in the story. By contrast, a paranormal setting is usually less violent and often has a romantic theme. My book overlaps because there are elements of other genres present.

My advice is to write the story first and foremost. This is your creation so do not allow outside influences such as predetermining a particular genre force you to change the story that needs to be told. Often, a novel will write itself as you begin to fill out the outline. Characters jostle each other for face time and who you think is a minor player becomes a strong supporting character. Conflicts will present themselves. Twists and turns in the plot will become obvious as you move along. Just write the story unhindered by a genre. When finished, call in the usual suspects, and the genre will step forward.

For Fiction Writers: Do you listen (or talk to) to your characters?
Absolutely! I start off with a handful of characters on the protagonist’s side, more characters siding with the antagonist, and miscellaneous neutral people. Then as I fill out the story, I allow the characters to jostle for position and face time with the reader. Often a minor character ends up with a very strong supporting role because they cry out for more scenes as the story progresses. So I listen to them and respond accordingly.

What advice would you give other writers?
Just write the story. Don’t worry about word count or genre. Then hire an editor. There are lots of starving editors out there who will work for cheap. Readers can tell within the first few pages if the story has or has not been edited.

How did you decide how to publish your books?
I’ve been in Barnes and Noble and Borders Books as a self publisher, and that is no small feat. But they were making all the money. Now I self publish. I will query my latest book Salem’s Daughters, but will only sign on with an imprint from the top six New York publishers. It’s not worth it to me to sign a five year agreement with a small publisher as I will still end up doing all the work regarding marketing and promoting.

What do you think about the future of book publishing?
I think we’ve found a good balance between ebooks and brick and mortar stores, at least for a while. I think if Barnes and Nobles continues to close stores, independent bookstores will replace them as people still like the feel and smell of a good book in their hands.

What genres do you write?: Speculative Fiction, Science Fiction, Supernatural, Action and Adventure